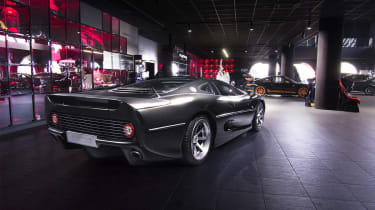 10
Never heard of Bulgarian tuner Overdrive AD before? Its latest project could well put it in the map. It has taken the Jaguar XJ220 supercar – unveiled 25 years ago at the 1988 British motor show – and thoroughly updated it. The XJ220 has been repainted in a ‘chameleon’ colour scheme that melds green, brown and gold finishes, while there’s a set of ADV.1 alloy wheels measuring 19in front and 20in rear. There are new LED lights at the front and rear, with the taillights apparently taken from the Ferrari 599. Quite a lot more kudos than the original XJ220’s rear lamps, borrowed from a Rover 200… Predictably, there are lashings of carbonfibre inside and out, with the front spoiler, engine cover and dashboard the main benefactors. The interior is also retrimmed in leather and Alcantara and there’s a brand new audio system. It looks much more menacing than the Jaguar XJ220, which is hardly a subtle car to begin with. And there are mechanical modifications to back it up, though an Akrapovic exhaust system, ‘complete revision of the engine’ and ‘improved braking system’ are the only details gleaned from Overdrive AD. The standard XJ220’s 3.5-litre twin-turbocharged V6 engine produces 542bhp and 475lb ft of torque, endowing it with a 217mph top speed and 3.7sec sprint to 60mph. Overhauling an iconic supercar shape can be risky business, but Overdrive AD’s Jaguar XJ220 is arguably quite a classy execution. Tell us what you think via Facebook and Twitter.
Video of the Overdrive AD Jaguar XJ220 in action below...