The Jaguar XKR-S GT is the most extreme version of Jag's XK coupe yet, and it's now going on sale in the UK. Full details here 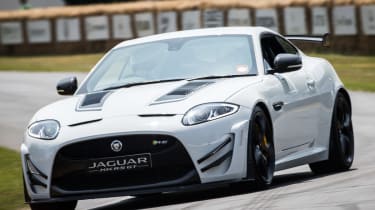 Meet the fastest road-going Jaguar ever. The XKR-S GT takes the XKR-S coupe and ramps up its key dynamic elements to make for one of the wildest, most hardcore British sports cars yet. The GT was first revealed at the New York motor show earlier in the year, and now Jaguar has announced that it will sell ten units in the UK, for £135,000 each.

The most striking change is its carbonfibre body kit, with a front splitter, dive planes, extended wheel arches and a rear diffuser all crafted from the lightweight material. And then there’s that colossal fixed rear wing, which contributes to a maximum 145kg of downforce. Every bit of aerodynamic addenda is said to have a purpose, with nothing superfluous on display.

Other motorsport-inspired upgrades over the hardly-timid XKR-S include carbon-ceramic brakes – a first for a Jaguar – which also get Ferrari-style pre-fill technology to speed up their responses. There's also overhauled, F-type inspired suspension, with a 52mm wider track up front, increased camber and revised bushings, plus ride height adjustable Eibach dampers. All told, spring rates are 68 per cent stiffer at the front axle, 25 per cent stiffer at the rear. The steering rack also boasts a faster ratio, borrowed from the new F-type. New 20in forged alloy wheels possess Pirelli Corsa tyres, measuring a stonking 305/30 at the rear. The standard XKR-S’s drivetrain remains, with a 542bhp 5-litre supercharged V8 driving the rear wheels through a six-speed automatic gearbox. With the 1713kg XKR-S GT’s tweaks, though, the 0-60mph time improves, falling 0.3sec to 3.9sec, plonking it firmly in supercar territory. The electronically limited 186mph top speed remains intact (as does the Jaguar XJ220's 'fastest Jag' record), though it’s at this speed the impressive maximum downforce figure is produced. The changes are enough to get the Jaguar XKR-S GT around the Nurburgring Nordschleife in less than 7min40sec – the sort of lap time reserved for Nissan GT-Rs and Porsche 911 GT3s.