Official pictures, video and details of the new 991-generation Porsche 911 GT3 as it's revealed at Geneva 2013 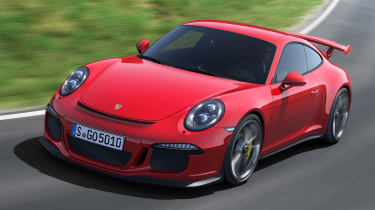 Some of that drop can be attributed to perhaps the GT3’s biggest talking point, its standard seven-speed PDK twin-clutch transmission. Porsche claims similar reactions to the 911 GT3 Cup car’s, with gearchanges executed in less than 100 milliseconds. It comes with shorter gear ratios than other Porsche PDK applications, while there’s a manual declutching feature when the driver simultaneously pulls both paddles. The gearstick, when used sequentially, offers a motorsport style back-for-upshift, forward-for-downshift layout.

Another new 911 GT3 feature is rear-wheel steering. Below 30mph the rear wheels turn in the opposing direction to the front wheels, improving manoeuvrability, while above 50mph they turn in the same direction, improving stability. Porsche reckons this new technology played a big role in reducing the GT3’s Nurburgring Nordschleife laptime to below 7min30sec.

The new 911 GT3 gets an all-aluminium chassis based on the 911 Carrera’s, but rides 30mm lower. Porsche’s PASM variable dampers are standard fit, while the GT3 gets its own multi-link rear axle design. Among the other standard equipment is Porsche Torque Vectoring Plus (including a locking rear differential) and 20in centre-locking alloy wheels, an inch-bigger version of the GT3 staple.

Despite a host of weight-saving measures – including a hollow subframe and aluminium exterior parts – the new GT3’s claimed DIN weight of 1430kg is 35kg heavier than its predecessor’s, the new gearbox and four-wheel steering likely contributing factors.