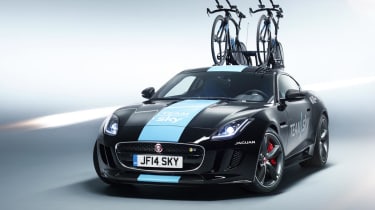 Jagaur Land Rover’s recently opened Special Vehicle Operations department has created a bespoke F-Type concept to act as a support vehicle to Team Sky. Supporting the riders in Stage 20 of the Tour De France, it will follow the riders as they tackle the long journey from Bergarec to Perigueux.

Based on the most potent F-Type, the Coupe R model, the one off SVO creation features the same 542bhp 5-litre V8 under the bonnet, enabling it to race from 0-60mph in about 4secs and onto a limited top speed of 186mph.

That top speed probably won’t be called into use however, because Team Sky’s F-Type features unique bike racks atop its roof, capable of carrying the Pinarello Bolide TT bikes used by the riders. To make clear which team these bike belong to, the F-Type features logos and colours that mimic Team Sky’s bikes. This scheme is also carried on into the cabin to match.

A separate electricity supply is also fed to the boot, providing power for necessities such as radios, amplifiers, microphones, horns and TVs that support communications between the team's Director and riders.

This isn’t the first time Jaguar has produced special vehicles for Team Sky. Before the team won in 2012 and 2013, Jaguar had already supplied modified XF Sportbrakes to give the team a slightly more practical looking option of support. But it wasn’t just the supply of support vehicles that makes Jaguar and Team Sky’s partnership so strong, technical knowledge is also passed over, with Jaguar helping to create the Pinarello Dogma F8 bike.

JLR Global Brand Experience Director, Mark Cameron said ‘The development of this F-Type Coupe is the latest example of our shared belief to push the boundaries and provide technologically innovative solutions, both on and off the bike.  The visual impact of the F-Type Coupe during Stage 20 will also of course bring added attention to Team Sky and our unique partnership.’

You can see Team Sky's F-Type in action on the 26th July.