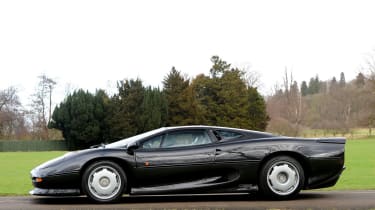 UK auction house Historics at Brooklands has unearthed an extremely low-mileage Jaguar XJ220 – the company’s first 200mph supercar – which will be sold at the 9 March sale. The current estimate for this rare car stands at £120-145,000.

This particular car is one of a handful of original left-hand-drive examples built by TWR in Banbury. Chassis 220620 was built on 18th March, 1994 but wasn’t sold until November 1996 when it made its way to Guernsey for a short period.

The car was destined to live in France at the original owner’s French holiday home where it remained until the car came back to the UK for the sale. To ensure the car was fully up to scratch, it was handed over to Jaguar XJ220 authority, Don Law Racing where over £25,000 has been spent. This included a major service, new fuel cells, clutch and hoses

The odometer now reads just 16,798km (about 10,500 miles), but one thing to take into consideration when bidding is that this car will be subject to 20 per cent VAT on the final price, due to the fact that duty was never paid when the car was first registered.