The Jaguar F-type Coupe is official at last, the range topped by the 542bhp F-type R 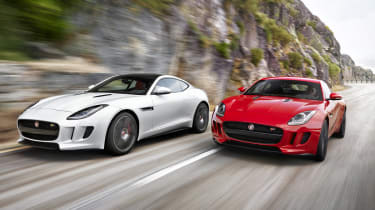 The Jaguar F-type Coupe has debuted at the 2013 LA motor show. It looks just as expected really, riffing heavily off both the Jaguar C-X16 concept car and the side profile of the classic E-type Coupe. That’s not to say it doesn’t look great, of course; it instantly becomes one of the best-proportioned coupes on sale. The big news stories, though, are a much lower price point than the F-type Roadster and a new range-topping F-type R performance model.

All the LA motor show stars are here

The R uses the 542bhp, 502lb ft tune of 5-litre supercharged V8 engine that sits in the XFR-S, XKR-S and XJR models, and it’s enough to hustle the hard-top F to an electronically limited 186mph top speed, via a sub-4sec 0-60 time.

While the R is over £5000 more than the V8 S Roadster, it has more than just an extra 39bhp. Its spring rates are up 4.3 per cent at the front axle, 3.7 per cent st the rear, while standard equipment includes Adaptive Dynamics, a new second-generation electronic differential, a braking-based torque vectoring system, and Jaguar’s ‘Super Performance braking system’, with 380mm front and 376mm rear brake discs.

Carbon ceramic brakes, which enlarge the disc sizes to 398mm front/380mm rear, are optional. Standard on all models is the eight-speed automatic gearbox seen across the Jaguar range, with steering-wheel-mounted paddles and nice short ratios.

Jaguar promises the Coupe is sharper and more reactive than the Roadster, with lightweight aluminium construction and the highest torsional rigidity of any production Jag (33,000 Nm/degree, if you’re wondering). Jaguar describes the F-type Coupe as its ‘most dynamically capable, performance-focused’ model ever, though it also boasts that the 407-litre boot (up from the convertible’s measly 196 litres) will comfortably hold two sets of golf clubs, so priorities seem to be a little mixed.

Regardless, we can’t wait to have a go. Especially as an F-type R-S with closer to 600bhp is heavily rumoured to enter production, and Jag’s ETO division (which was responsible for the wild XKR-S GT) is yet to reveal its F-type plans.

In the meantime, here's a video of the F-type R displaying its uniquely tuned sports exhaust system...