We've driven the all new Jeep Grand Cherokee - but is there still room in the market for an old-school SUV? 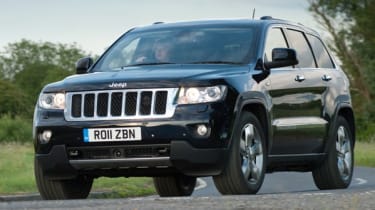 Don't let the familiar silhouette fool you - behind it the freshly launched Jeep Grand Cherokee is almost entirely new. And despite Daimler and Chrysler's corporate divorce, the new Grand Cherokee has been engineered on the same platform that will underpin the forthcoming Mercedes ML-class and GL-class. So you'd be justified in expecting it to feel vastly better than its cheap-feeling, wallowy predecessor.

Jeep has switched production of the Grand Cherokee back to the 'States - previous European versions came from Austria. But despite its all-American origins onloy one engine will be available in the UK from launch, a new 3.0-litre V6 turbodiesel. Company sources confirm that an 'SRT V8' version is likely to follow next year.

A simple model range means that only two versions are available: the 'Limited' costs £36,795 and the range-topping 'Overland' which weighs in at £43,995.

While acknowledging the limited evo-ness of a two-tonne SUV, there's no doubt that the new Jeep Grand Cherokee is, on paper, a vast improvement over its predecessor. Jeep claims that structural rigidity has been improved by an astonishing 146 percent. Yet despite that - and more standard kit - the Grand Cherokee manages to be both bigger and lighter than the old version.

The 3.0-litre 'CRD' V6 engine has been co-developed by VM Motori - responsible for the truly appalling diesel engine in the first-gen Grand Cherokee in the late 1990s - and Fiat Powertrain (with the Italian company now linked to Jeep through its Chrysler partnership.) The motor uses a 'bedplate' design to increase strength and is claimed to be good for 237bhp and 406 lb ft of torque. Drive is supplied to all four wheels through a standard-fit five-speed autobox. With official scores of 34.0mpg combined and 218g/km of CO2, the new motor is class competitive.

Genuine off-road ability - something of a rarity in this segment - is assured with generous ground clearance, low-range gears and a clever traction control system which incorporates five 'terrain' modes, including Sand, Mud and Rock. The range-topping Overland also comes with air suspension to enable the ride height to be varied according to what's underfoot.

The Grand Cherokee is no sportscar - but it's vastly better on the road than its woeful predecessor. Body control is good with either air or steel suspension and although roll angle quickly get acute - and ultimate grip is predictably limited - the steering is now accurate enough to allow the driver to thread the Jeep confidently down a narrow road.

The new engine is smooth and - once the turbo is spinning - respectably fast. It never feels as quick as Jeep's claimed 8.2 second 0-62mph time makes it sound, largely because of the reluctant kickdowns handed out by the dull-witted autobox (it can take a good second and a half between flooring the throttle and having the transmission deliver a new ratio.) That said, the motor's torque curve is more than fat enough to hide the transmission's recalcitrance in ordinary driving.

And off-road? With the increasing number of road-biased SUVs its good - in a slightly perverse manner - to realise that some are still capable of cutting it in the real rough, and the big Jeep relishes a chance to scramble its way over surprisingly chunky obstacles and through inches of mud that would stop most 4x4s in their dinky little tracks.

With its combination of decent road manners and genuine go-anywhere ability, the Jeep Grand Cherokee is a worthy addition to the increasingly short list of 'proper' SUVs. It's well priced against rivals like the Land Rover Discovery and Toyota Land Cruiser, but we'd be remiss not to point out that - for those prepared to sacrifice the mud-plugging and rock-scrambling abilities - there are lots of better-handling options out there.

Previous overseas experience of driving a 5.7-litre petrol V8 version suggests that we're not missing much - the 340bhp 'Hemi' is barely quicker than the CRD in real world use and drinks fuel faster than an oilwell fire (try 15mpg in exchange for relatively gentle progress.) Excitement, if it comes at all, will arrive with the 'SRT' version. 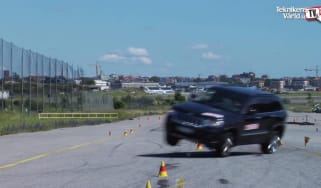 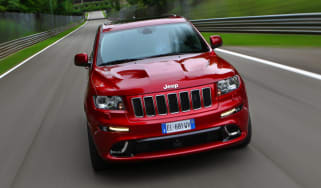 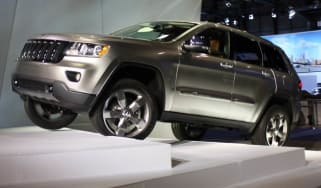 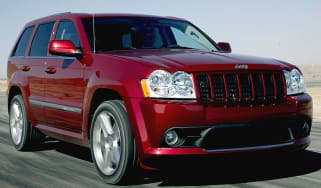 4x4 gets heap big V8
Skip to HeaderSkip to Content