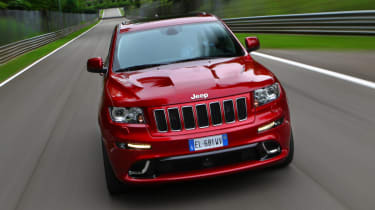 What is it?  The new Jeep Grand Cherokee SRT, a high-performance SUV that’s been fettled by Jeep’s Street and Racing Technology team in the hopes of creating a genuine rival to the Porsche Cayenne and BMW X5M.  Technical highlights? How about a 6.4-litre HEMI V8 with 461bhp? There’s not many more characterful engines out there than this, with a volcanic roar under hard acceleration and a gentle rumble at idle. It goes as quick as it sounds too, with 0-62mph taking five seconds dead. There’s also a new Selec-Track system, which lets drivers change the settings of the dampers, steering, gearbox and throttle response. ‘Auto’ is supposed to be the most comfortable, ‘Sport’ sharpens everything up and firms up the dampers and ‘Track’ takes things a step further still while also switching off the traction control.  What’s it like to drive?  Quick, loud, firm, boisterous… everything you’d expect from a car that looks as evil as the SRT does. It really is thunderously fast and the nice, wallowy ride of the standard Cherokee has been traded in for the kind of firm ride that’s more at home on an Audi TT. The high centre of gravity and near-2.5 ton kerb weight ensure it’s nowhere near as agile, but there’s more grip than you’d expect. The slow steering – no matter which mode you’re in – does seem a bit at odds with the all-out performance mantra of the rest of the car though.  How does it compare?  In terms of dynamic ability and interior quality it’s still a fair way short of matching the Cayenne or X5M. They both exude an air of luxury from the minute you step in the cabin, while the tacky dials and cheap feeling centre console of the SRT simply don’t. And while it’s entirely capable of attacking a twisty back road and doing a good job of it too, there’s a final 10 per cent in the German models that the SRT just doesn’t have.  The Jeep does compare very well indeed in one area though, and that’s price. A Cayenne Turbo costs almost £90,000, a BMW X5M tops £80,000 and the Grand Cherokee SRT? Just £58,995. There are barely any options to tick either as part-leather seats, 20in alloys, satnav, a 19-speaker stereo, adaptive cruise control and a panoramic sunroof all come as standard.  Anything else I need to know?

Depsite being fitted with a fuel-saving cylinder deactivation system we only managed 14mpg on our 200-mile test route and saw single figures on plenty of occasions, too. The 93-litre fuel tank means you won’t have to fill up too often but when you do it’ll set you back about £135. The CO2 emissions are so high that you’ll have to shell out £1000 for road tax in the first year too. It may not be top of your list of priorities if you’re buying a car like this but you will need seriously deep pockets to run the SRT.