Kia Soul gets a refresh 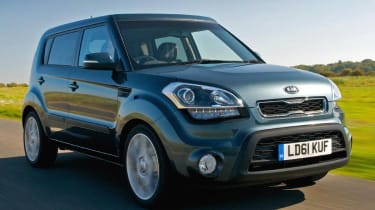 Kia’s funky Soul has been given some mid-life fettling. Top billing goes to new engine choices, which boost both performance and economy. There’s a new direct injection 1.6-litre petrol engine, which develops 138bhp and 122lb ft, up by 14bhp and 7lb ft compared to the outgoing 1.6. It cuts the 0-60mph time to a nice round 10.0sec while the top speed is a modest 112mph. The sensible numbers are 44.1mpg fuel economy and 149g/km of CO2 emissions. You can pick a diesel, too, with Kia offering a tweaked 1.6-litre CRDi unit combining 126bhp/192lb ft and 10.3sec/112mph performance with 57.6mpg/129g/km. Both engines get a six-speed manual gearbox as standard (replacing the old five-speeder) while the diesel gets the option of a new six-speed automatic, though this slices fuel economy by nearly 10mpg. Cosmetic changes to the Soul are few, such is the appeal of its looks to most buyers, the facelift limited to mildly fettled lights, grilles and wheels. There’s some new electronic acronyms to learn too, in the form of VSM (Vehicle Stability Management), which utilises the ESP to give some extra assistance in icy and slippery conditions, and HAC (Hill-start Assist Control), which does as it says on the equipment list. Prices kick off at £12,495 for the entry-level 1.6 petrol, rising to £17,795 for a specced-up auto. Read our Kia Soul review and see a picture gallery here