The KTM X-Bow GT - a more useable, road-focused version of the quirky Austrian track car - gets a 2013 Geneva reveal 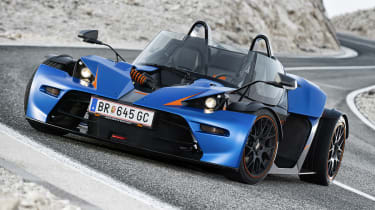 The KTM X-Bow GT will be unveiled at the 2013 Geneva motor show. It attempts to bring new useability to the track-focused sports car, with a windscreen, side windows (which also double as doors) and a removable soft top. Thanks to the X-Bow’s famed carbonfibre chassis tub, though, the ‘doors’ are unlikely to make ingress and egress any more graceful. The windscreen is heated and comes with a standard windscreen wiper and washer system, while the soft-top is homologated for road use up to 80mph. At the X-Bow GT’s heart is a revised version of the drivetrain from the X-Bow R, meaning rear-wheel drive and an Audi-sourced turbocharged 2-litre four-cylinder petrol engine with 281bhp and 310lb ft. A six-speed manual gearbox is standard. No performance figures have yet been released, but the more user-friendly additional kit is unlikely to have a huge impact on the regular R’s 790kg kerbweight, so its sub-4sec 0-60mph time and 144mph top speed shouldn’t changed drastically. Further details – including prices – will be revealed next week in Geneva, though a rise over the £64,850 of a standard X-Bow R seems likely. It will remain a pricey toy, but one which much more road-use appeal than before.