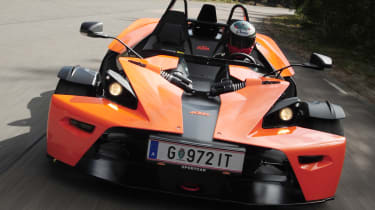 Given the insistence with which the red change-up light strobes your eyeballs, you’re certainly going to notice the extra power that the X-Bow’s factory-approved upgrade kit delivers. And leaving aside concerns about whether the LED really needs to start flashing nearly 1000rpm before the limiter intrudes (or if it needs to be so bright that at night it’s like someone is jabbing your visor with a laser-pen), there’s no denying the extra 59bhp and 66lb ft have the desired effect.

Second and third gear are consumed so quickly there’s little point moving your hand from the lever (a long, vague shift, like it’s lived a tough life already), but 3.5sec for the 0-62mph? It never feels quite that fast. Partly this is down to the VW group-sourced 2.0 TFSI engine, which majors on driveability rather than excitement, so by the time the rev-counter’s digital arc passes 3000rpm you’ve already got the full force of 295lb ft at your back.

According to the power graphs, the ABT kit (new turbo, upgraded ECU, £5300, ouch) maintains power a little better at the top end than the standard car, but on the road, at least, there’s little point holding on for every last rev. Not when you’ve got such vigorous mid-range action and are about to be reminded once again that you should have taped over that cursed LED before you left home this morning.

Neither is there anything to be gained aurally. Another £1417 on top of this Clubsport-spec X-Bow’s £59,755 list price is accounted for by a sports exhaust system. It sounds great. If you’re in a tunnel and you’re not wearing a helmet. At all other times any noise is practically undetectable – perhaps a bit of turbo screech (which can, slightly unnervingly, be mistaken for a distant police siren), but as ever this is not a revvy, high-energy, high-drama engine. It too ably masks the speeds it so easily achieves.

The Clubsport mods do help the X-Bow harness the extra power, mainly because they make it a more immediate and engaging car, and hence more confidence-inspiring. The idea is that the Clubsport model could be further upgraded for competition use (which is why it has a stronger protection cell and those cumbersome plastic outriggers behind the front wheels), but it is essentially still a road car.

Track orientated it may be, but it still rides immensely placidly in standard set-up. It doesn’t have to, as the suspension is tuneable to the nth-degree, the Clubsport gaining adjustable pushrods as well as compression and rebound. I guess it could drive however you want, and to be fair it felt pretty good as we had it. Flatter and keener than the standard model we were rather underwhelmed by last year, it doesn’t half dispatch corners in a hurry, the Toyo R888 tyres (an extra £733) biting at the tarmac through the super-quick steering. Tighter exits reveal the presence of an LSD (standard, thankfully), but you’d have to be trying really hard to get the back to move off-line. Nevertheless, the outer edges of the handling envelope aren’t too sharp and the X-Bow has immensely reassuring and powerful brakes. Truly exceptional, in fact.

There’s no escaping the weight, though. Quoted at 805kg (15kg more than the ‘Street’ version, ironically), that’s actually a dry weight, and once you and a load of fluids are on board, the all-up figure is around 930kg. Not so lightweight, and with most of it behind you, playing with the balance through corners isn’t nearly so delightfully easy as in a Caterham. Speaking of which, despite not being as wide as it looks, nor does the KTM manage the 7’s trick of making a B-road feel as wide as the M1.

For all that, though, the X-Bow is a uniquely gorgeous thing and the Clubsport mods and 300bhp upgrade do help bring it into the same dynamic orbit as our favourite lightweights.