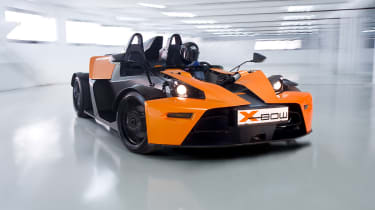 We spill out of the cool of the minibus into the bright, warm Spanish morning and make a beeline for the row of six KTM X-Bows. First impressions are good. This is the first time I’ve seen one outside the pages of a magazine and it’s not as big as I’d feared. It’s also more striking and exquisitely detailed than I’d hoped. It’s a piece of sculpture.

The X-Bow (say ‘crossbow’) is quite unlike any other small sports car because it is built around a carbonfibre tub. It’s a beautifully finished tub too, the ordered weave on show beneath a clear matt lacquer, while its curves and angles have been designed and developed by renowned race chassis experts Dallara. Adding to the cachet and Italian feel are brakes by Brembo, seats, such as they are, by Recaro, and ride and handling refined by Dallara and Loris Bicocchi, the chassis ace whose credits include the Bugatti Veyron, Pagani Zonda and Koenigsegg.

Yet this is an Austrian car built in Graz by a company that until now has been known principally for its off-road motorbikes. This diversification of its business is, it says, a response to dwindling numbers of motorcycle licence holders in Europe, and it’s a project of ambitious scale: KTM plans to build 500 cars this year but hopes to grow production to 1500 to 2000 per annum. For reference, Caterham makes around 500 cars per year.

Adding further credibility, the engine mounted transversely behind the tub is Audi’s 2-litre turbocharged four-cylinder. It produces 237bhp, which it’s claimed is capable of propelling the X-Bow to 62mph in under 4sec and to 100mph in under 9sec. Impressive figures for a car which, at 790kg, is getting on for 300kg heavier than the likes of the Ariel Atom and Caterham 7. Suspension is by double wishbones all round, with inboard, push-rod operated spring/damper units up front, while the underfloor is designed to generate positive downforce that can help you reach up to 1.5g cornering on road-legal tyres.

We’re in the right place to be able to experience all aspects of the X-Bow’s performance; KTM has hired the fabulous Circuit Ascari near Ronda in southern Spain, which is a stern challenge for any car. We won’t be able to deliver a definitive verdict, though, because there will be no road driving, but although we’ll be sampling the X-Bow exclusively on track, it’s in road trim – with the mandatory 11cm ground clearance and fresh, regular, deep-treaded Michelin Pilot Sport 2s.

We have already been advised that the X‑Bow has no power steering, no brake servo, no anti-lock, no traction control and no stability control system, but the first challenge is getting in, because it also has no doors. Happily there isn’t a sticker advising ‘no step’ on the wide, fragile-looking running boards between the wheels (they will support 200kg), so with the steering wheel removed (quick release is an option) you can swing a leg over, find the floor, get your other leg over and then slide down into cockpit.

The seats are fixed, the backrests of the rubberised Recaros set into recesses in the tub. Tug a lever on the floor and the complete pedal assembly slides into place. Pull on a helmet, buckle up the four-point harness and thumb the starter button in the centre console. We’re not heading straight out onto the track, however; KTM has devised a short loop on the access roads around the back of the pits to give us at the very least a hint of its on-road demeanour.

It’s not much, yet it’s surprisingly revealing, suggesting that the ride quality will be very good and demonstrating that engine vibrations are extremely well isolated from the tub and that the engine is without temperament. It also shows that the whole car exudes a sense of high quality in the feel and action of its controls and is shot through with a feeling of integrity. It’s what you’d expect to feel if there was an Audi or Porsche badge on its nose.

I find the seat comfortable and supportive but the driving position a fraction higher set than expected, yet the right-front wheel on this left-hand-drive car is still just out of view. The X-Bow feels wide too, but you get used to this quickly.

Onto the track and the weight and rate of the steering is spot-on, the brakes are good – not too heavy and with lots of feel and bite – and the clutch and throttle make a pleasingly consistent trio down in the footwell. There’s decent shove from the Audi engine too, but not much else once you’ve got going. Apparently the exhaust volume comes in just below the maximum permitted by EU regs, but inside a helmet, with wind-buffeting kicking in early, it seems virtually silent. There’s nothing through the tub either, so once you’ve figured out which way the circuit goes, you’re driving it on the shift light in the centrally mounted instrument pod.

Happily, the chassis is impressive and challenging enough to make this seem almost irrelevant. In pure road-going spec it feels very poised and exploitable. What’s most striking is that while most mid-engined lightweights have sensitive and often light steering, the front-end of the X-Bow seems planted, weighty and positive, even though at 37/63 front/rear its weight distribution is little different.

The X-Bow is remarkably friendly, too. It’s playfully oversteery in the slower corners, giving you the option of backing off and gathering up or keeping it nailed and riding it out, and there seems to be a built-in calmness in most scenarios that gives you time to react. There is mid-engined attitude in there; steer sharply in a left-right flick and the pendulum effect can build up to momentum oversteer, but once you get to know the car, you can manage this so that you exit the sequence dealing with just as much attitude as you’re happy with. On these road tyres the X-Bow proves wonderfully progressive and calm under braking too – lock a wheel and it’s quickly rolling again if you ease the pedal pressure.

Although we’ve yet to drive the road set-up on the road or see what a track set-up can do for the X-Bow, what is clear is that KTM’s first car exudes quality; it feels like a lightweight sports car developed by a big-name car maker with a huge budget. It’s not perfect, though. I predict that the first thing most owners will do is ditch the stock exhaust for something a bit louder and fruitier. The gearshift could be tighter and more positive too, and until the windscreen that is in development arrives, it won’t have the useability of a Caterham.

Here in the UK, it’s not the bargain it was a year ago, either. Back then it was set to cost less than £35K, putting it in competition with cars like the new Caterham R500 and the supercharged 300bhp Ariel Atom, but there has been a big shift in the euro/£ exchange rate since then. The list price is now £43,099, and that’s before you add must-haves like clear-coat carbonfibre, a limited-slip diff and the removable steering wheel.

Even so, the X-Bow remains a hugely attractive and desirable car, and I have an inkling it might just be brilliant on British B-roads.