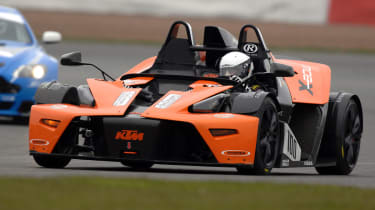 It’s cold even by Silverstone’s draughty standards, but it’s not every day you get the chance to witness the competition debut of a potential world-beater right on your doorstep.

So coats and woolly hats are donned and, at 8.30am, I and the one other spectator who has bothered to turn up witness two diminutive KTM X-Bows being harried through the complex by a pack consisting of Aston Martins, Ford Mustangs and a Corvette C6.

It’s final practice for the first round of the GT4 European Cup, and it’s rather like watching a pair of minnows being chased by a shoal of hungry piranhas – an appropriate analogy given that not everyone has welcomed KTM to the series with open arms.

KTM’s motto has always been ‘Ready to race’ and this is the X-Bow’s chance to prove it, ahead of the launch of the road car this August.

The two KTMs qualify 6th and 8th, some three seconds off the pace of pole-sitter Michael Mallock in his Aston N24, but the X-Bows compete in the new Sports Light class for sub-800kg production cars, which has a very different set of regulations. For a start, Sports Light cars have to run on road tyres rather than slicks (KTM chose Pirelli P Zero Corsas), and they have to run at 800kg, which has meant adding 70kg of ballast to each X-Bow. Engines must be standard too, so that’s 237bhp for the KTMs’ Audi-sourced 2-litre turbo (the Astons have 400bhp), while the roll-hoops have been beefed up to withstand ten times the car’s weight rather than the 2.5 times required for the road-going car. Bodywork also had to be modified to shield the wheels better in case of contact with another car.

Despite this, the racing X-Bow still looks very like the road car, an example of which has been brought to Silverstone by project manager Stefan Riedler. It seems that it’s the finishing details that are causing Riedler the most headaches at the moment. Trying to keep the mirrors vibration-free for instance – they’re at the end of long, slender supports – or getting the exhaust note just right, a pursuit that has seen KTM revert to a twin-outlet design.

Inside the car, the moveable pedal-box now has a greater range of movement (280mm rather than 210mm) after the lanky Walter Rörhl struggled to get comfortable during a secret drive at the Nürburgring Nordschleife recently. Riedler wouldn’t talk lap times but he did reveal that they saw 1.5g when cornering – amazing for a car on road tyres.

The seat design has been finalised by Recaro, whose name now appears on the headrest, while the steering wheel has a revised release mechanism to prevent it coming adrift accidentally. Finally, the dash read-outs have moved from the steering wheel to a pod in the centre of the car as the original location didn’t work as well as envisaged.

On the all-important emission front it looks as if the KTM will achieve a rating of just 170g/km, which is a terrific result for a car of its type.

There’s plenty of time before the race starts at 1.35pm, and it seems the cars require only checking-over post-qualifying; the KTM team’s workshop is remarkably peaceful given that this is such an important day in the company’s history.

The man responsible for the Austrian motorcycle-maker’s adventure into four wheels is product manager Toni Stöcklmeier and he’s really excited about racing the X-Bow. ‘It was always destined to race and we will build customer race cars next year,’ he says, ‘so today is all part of this development process. We want our cars to compete in many classes against other lightweight cars. I’m not sure it makes sense for us to have a one-make series.’

The cost of a race-prepped X-Bow will be 75-80,000 euros (around £60-64,000) a lot more than the road cars, whose UK price has been confirmed at £34,500. After much debate, KTM has decided against setting up a UK dealer network. Stöcklmeier explains why: ‘KTM will be dealing with X-Bow customers directly from the factory. We will have service partners in the UK who will look after the car and deliver the car to the end customer. As the UK is such an important market for us we expect we will need around four partners to service customers’ cars.’

I’m keen to find out how KTM will grow the range after its launch and it seems likely that the X-Bow will gain the engine from the new Audi S3 next year, tuned to give 300bhp as standard. At around the same time, Audi’s twin-clutch gearbox (which adds 30kg) will also become available as an option, but only in limited numbers as Audi has set a maximum supply of 500 gearboxes per year.

KTM is also looking at adding a full windscreen, although this development is some way off. Beyond that, development details get sketchy.

As for KTM’s four-wheeled racing debut, the wait is nearly over. The drivers, Catharina Felser and Christopher Haase, wriggle into the cars, unconcerned that outside there’s a touch of drizzle in the air. In fact, KTM don’t mind the rain at all, as it should neutralise the power advantage of the GT4-class cars and boost the X-Bow’s chances.

The KTMs make a good start in race one and are holding station mid-field before the lead Aston has a biggie, bringing out the pace car for a few laps. When the racing resumes, Haase starts to make progress, moving up a couple of places until, mysteriously, the ignition on his car cuts for 10 seconds or so. Undeterred, he battles through again to finish 7th, with Felser not far behind in 10th.

The result in race two is even better, the X-Bows finishing 5th and 6th, making it a pair of 1-2 finishes for KTM in the Sports Light class. Mind you, there was always a good chance of this – the X-Bows are the only cars in their class.

You get the impression KTM enjoys sparring with the bigger GT4 cars, but direct competitors – a Lotus 2-Eleven and Gillet Vertigo – will soon join the Sports Light fray for the second meeting, at Monza. Whether any of the lightweights will be truly successful in GT4 is open to question, though. One of the KTM crew suggested that the organisers would ensure that the ‘proper’ GT4-class cars kept winning as they ‘wouldn’t want some strange little race car from Austria out front’.

Nevertheless, the exciting KTM X-Bow has finally arrived, and if it follows in the treadmarks of the company’s competition bikes, it will soon become a force to be reckoned with.