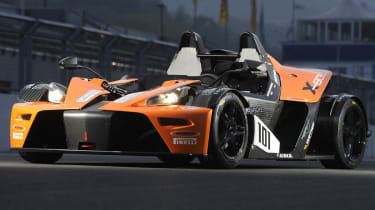 The brisk development of the KTM X-Bow has taken another step forward with the 'Race', a fully FIA homologated racer boasting 30 changes over the road-spec car.

These include racing dampers and brake pads, a racing harness, toughened rear roll hoops and a revised rear bumper. Together they all help hone the X-Bow to perform better on track while also getting it the thumbs-up from the FIA. The 'Race' uses the same 2-litre Audi TFSI engine as the road car, with outputs of 237bhp and 229lb ft allowing a 137mph top speed and a 0-62 dash of 3.9sec. The racecar weighs in a little heavier than the road model at 825kg.

The race-ready X-Bow will set you back c£66,000 - it costs 82,900 Euros ex-works and excluding taxes - with cars being delivered to customers from January 2009. That's less than two years after KTM debuted its first-ever car at the Geneva motor show in 2007.

A bit of extra money will take you and your new X-Bow racing. The company has set up the KTM Customer Racing Service to aid buyers in taking a 'Race' X-Bow on the track, supplying a full support crew and an extensive array of spare parts for anyone campaigning one of its cars. This includes the GT4 European Cup, the ADAC GT Masters and selected 24-hour races.

In 2009 there will also be the 'KTM X-Bow Super Sport Cup', a league split between North - UK, Germany, Netherlands, Belgium - and South - France, Italy, Spain - Europe. The top ten from each territory will then meet in a final, end-of-season race to find the champion.