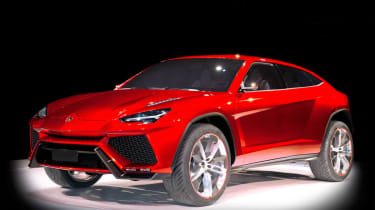 Lamborghini is serious about entering the premium SUV market. At the Beijing motor show today, it revealed this ‘Urus’ SUV concept with Lamborghini CEO Stephan Winkelmann saying ‘we believe this is our future’. Lamborghini believes introducing a performance SUV (priced at around £140,000) into its range is a good idea, because it could go on to be its biggest selling model. It could be by up to a factor of 2:1, selling 3000-3500 examples a year when 2011’s Aventador and Gallardo combined sales totalled 1602. It’s easy to see how important this third model could be to Lamborghini.  ‘I want to widen our customer base and protect us against downturns,’ Winkelmann continued, ‘and the premium SUV market has changed dramatically over the last 3-4 years, and has become a highly emotional segment with excellent growth potential, especially in the new markets like Russia, Middle East, China and India.’ Lamborghini’s design director, Filippo Perini is very pleased with the Urus concept, telling evo ‘it’s very tough when you are faced with designing a brand new Lamborghini model. A Lamborghini has to be challenging, extreme, uncompromising, sensuous and, of course...Italian.’ Perini then went on to explain how the Urus will have height adjustable suspension, that lowers at high speed, and adaptive aerodynamics with a height adjustable front spoiler (moving upwards to maximise clearance off-road) and an active rear spoiler. It’s a relatively compact SUV too, measuring 4.99m long, 1.99m wide and 1.66m high. A Porsche Cayenne is 1.7m tall. Lamborghini’s head of development, Maurizio Reggiani, explained how the Urus will use a shared platform structure being developed within the VW group to underpin the next generation of Porsche Cayenne, Audi Q7 and Bentley’s controversial SUV.  But there will be important differences, as Reggiani explained; ‘Our car will be the sharpest, most dynamic to drive. It will have specific front suspension to enable us to deliver this and it will also at least 100kg lighter than the other cars using the same platform’.  This weight saving will be achieved by extensive use of Lamborghini’s latest wonder material, ‘Forged Composite’, which is formed using resin infused with short strands of carbonfibre and is apparently 50 per cent faster to form than the RTM composite introduced on the Aventador.  ‘We will use forged composite for the body panels, the structure and for many of the aesthetic parts in this car. No one else in the group will have this material and it saves us a lot of weight, especially in the interior because we don’t have to cover it in leather, as it looks really cool anyway!’ said Reggiani. The interior will feature four individual seats, all with identical seat adjustments, making the rear seats just as luxurious as the front pair.  Another surprise is that the production version of the Urus will use an engine from within the VW Group and although the final drivetrain configuration has yet to be decided, the engine of choice is a twin-turbo, petrol V8 pumping out at least 600bhp.  ‘We looked at having the gearbox in the rear for ideal weight distribution but now I think we will end up with a conventional drivetrain with engine, gearbox, centre differential and real differential, as it is lighter and we can share components across the group’, Reggiani continued. ‘This car is still a financial risk for us because it is a volume car but it’s a niche within a niche, so we have to be sure this is a perfect fit within the Lamborghini brand.’ The biggest issue for Lamborghini is that the production car won’t arrive in showrooms until 2017, even if it got the green light today. That seems a long time to wait – let’s hope Lamborghini works out a way of introducing it quicker because this SUV looks much better than Bentley’s SUV, which debuted at March’s Geneva motor show just a weeks ago.