The Miura was the car that put Lamborghini on the map as a premium sports car manufacturer, and the company hasn't looked back since 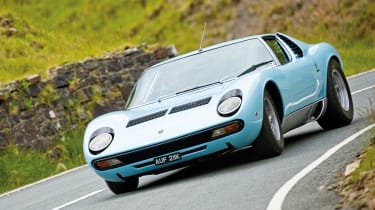 The Miura is the Lamborghini you know you must drive before you die. Its reputation for being fast but flawed – not to mention fragile – might lead you to believe that indulgence in one act could bring about the premature arrival of the other. But that’s all part of the dangerous fascination.

To be blunt, the Miura was a little ‘over-engined’. Its quad-cam V12 was a development of the extraordinary 3.5- litre powerplant designed as a quasi-race unit by ex-Ferrari engineering wizard Giotto Bizzarrini. As well as twelve cylinders, four camshafts and six  double-barrel carburettors, it possessed what looked like several miles of visceral chains. Naturally, all this sounded impressive enough from the outside. Inside it was plain loud.

By the time it appeared in the Miura – sensationally slung sideways across the middle – it had grown to 4 litres and 350bhp. Gianpaulo Dallara’s trend-setting configuration could be seen clearly in the 1965 Turin Show chassis mock-up. The actual car appeared at Geneva a year later. This time it was fully clothed by Bertone, the work of its new design genius, Marcello Gandini. It was a sensation, a radical departure from the front-engined superfast tourers that had come before it.

All of that said, the Miura was highly-strung and had a fragile disposition. In its original form, the chassis would flex perceptibly during hard cornering. It also had a tendency to lift its nose at high speed, so that at anything above 150mph it could wander alarmingly – a tendency that was only partially cured with the later S and SV versions. Italians are chaotic, so are their cars. They also know what the magic of driving is and how to make it. In the end, that’s all that matters. Some 45 years later, the Miura remains arguably the sexiest car ever made. Here's the full story...

Birth of an Icon: Lamborghini Miura

Ferruccio Lamborghini did not want his cars to go racing. As far as he was concerned, Lamborghinis were fast cars for road use only.  There is some irony, then, in the fact that the model that really put his company on the map – the Miura – took one of its defining characteristics from race cars: namely its mid-mounted engine.

The idea of using such a layout came from Lamborghini’s chief designer, Gianpaolo Dallara, and chassis engineer Paolo Stanzani, who drew up the initial plans for the car in their spare time during the summer of 1965. As well as placing the engine behind the cabin, they also thought it should be fitted transversely, rather than longitudinally-, to enable the car’s wheelbase to be kept as short as possible. And there was one more twist: a space-saving shared lubrication system for the engine and gearbox, just like in the contemporary Mini. (Dallara was a great admirer of Alec Issigonis’s creation – ‘I thought the Mini was an absolute masterpiece,’ he told evo in 2002.)

Ferruccio was impressed by the plans, and gave Dallara and a small team of engineers the go-ahead to begin work.  The first fruit of their labours was seen at the Turin show in late 1965: a bare rolling chassis constructed from box-section steel by Modenese chassis-builder Marchesi, with wishbone suspension, disc brakes (unventilated!) and a 3929cc, 350bhp version of the Bizzarrini-designed V12 from the 350GT and 400GT mounted in its middle.

Called the ‘P400 GT chassis’ – P400 standing for Posteriore 4-litre, referring to the engine’s location and capacity – its configuration immediately started speculation that Lamborghini was creating a race car.  Some people knew better, though, amongst them potential customers wanting to place an order for this new Lamborghini road car – even though its body had yet to be penned.

Who would get that job wasn’t  decided until the end of the very last day of the Turin show when, the crowds having finally died down, Nuccio Bertone visited the Lamborghini stand to get a good look at the chassis and he and Ferruccio began discussing what the completed car might look like.

Bertone’s chief stylist, Giorgetto Giugiaro, did the initial sketches (Ford’s GT40 was an influence). When he left to join Ghia, his replacement, Marcello Gandini, picked up the reins. Ferruccio thought Gandini’s design was perfect. Reputedly the first words he said to Bertone upon seeing the drawings were simply, ‘Make it.’

The first bodied P400 was completed in March 1966 – just seven months after the project began – and was driven from Carrozzeria Bertone’s workshops just west of Turin to the Geneva motor show by Nuccio Bertone himself, even though the suspension had yet to be tested and tuned. On its tail was a badge that revealed the car’s new name: Miura. The letters bore horns and a tail because ‘Miura’ came from Eduardo Miura, a breeder of exceptional fighting bulls whose ranch in Seville Ferruccio had visited in 1962. The visit had obviously made an impression, as it also inspired Lamborghini’s bull emblem.

With a claimed top speed of 180mph and a shape to die for, the red prototype wowed the crowds at Geneva, and made Ferrari’s front-engined 365 California Spyder, which was also making its debut at the show, look more than a little old-fashioned. After the show, test driver Bob Wallace began work on refining the Miura’s handling, a job that included driving the prototype to Monte Carlo for the 1966 Grand Prix weekend, where it acted as the course car and where Ferruccio drew crowds to Casino Square simply by sitting in the driver’s seat and revving the engine. Seventeen orders were received that weekend alone.

The first production cars were delivered in December 1966.  They weren’t perfect – in its initial form the Miura suffered from front-end lift at high speeds, its true power figure was more like 320bhp, its real top speed was 170mph at best, and it was, as Dallara would later admit, ‘hopelessly underbraked’. The later S and SV versions would address most of these issues, but even at its most flawed the Miura was undeniably special. In fact, so different was it to anything that had gone before, a new word had to be created to describe it: supercar.