Land Rover has unveiled a second version of the DC100 concept, hinting at the future look of the Defender, at the 2011 Frankfurt motor show 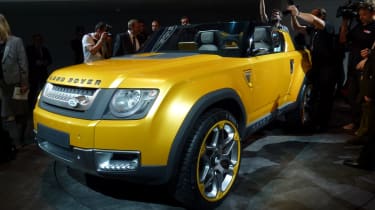 Described by Land Rover’s design boss Gerry McGovern as being ‘the first step of a five year journey to the new Defender’, the DC100 is intended to confirm there is a future for the company’s most iconic product. But early reaction to the images of the DC100 hard top was mixed, to say the least – and we’d be less than honest if we said that the DC100 Sport improved matters enormously.

Finished in bright yellow, the DC100 Sport, is effectively a speedster with a wrap-round aero screen claimed to be inspired by the fold-down front windscreen of soft-top versions of the old ‘series’ Land Rovers – we’re not quite sure how that one works. It also features ‘social seating’ – three abreast across the front, a removable touchscreen display and a ‘generous load bed which incorporate fittings specifically designed to secure extreme sports equipment.’

Land Rover has also released some more details about the concept’s drivetrain, saying that it has been designed to use 2.0-litre four cylinder petrol or diesel engines with both hybrid and plug-in capabilities. Slightly confusingly, Land Rover say the DC100 has both ‘permanent four wheel drive’ via an eight speed autobox, but also a ‘Driveline Disconnect’ function to decouple the rear axle to save fuel when four-wheel drive isn’t required. Making it part-time four-wheel drive, by our reckoning.

Other neat touches include ‘induction charging’ to recharge gadgets wirelessly and ‘wade aid’ which uses sonar to assess the depth of water being driven through to advise the driver of the optimum speed. Getting further from reality there’s also a ‘driver activated spiked tyre system’ which can be activated at the touch of a button. 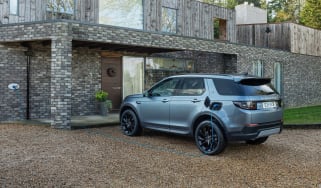