Standing on the hard shoulder of the M25, looking at the white rump of the Caterham parked 50 yards up the road, it's rather a sad ending to our time with GK04 CWV. At rush hour on a Wednesday morning, the Caterham's alternator had lost the will to live, leaving me suddenly at sea in the middle-lane of London's infamous ring road (an event almost as palm-moistening as unexpected lock-stops oversteer in the wet). Thankfully it found just enough revs to get me safely across to the hard shoulder before coming 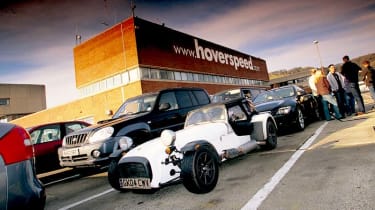 Standing on the hard shoulder of the M25, looking at the white rump of the Caterham parked 50 yards up the road, it's rather a sad ending to our time with GK04 CWV. At rush hour on a Wednesday morning, the Caterham's alternator had lost the will to live, leaving me suddenly at sea in the middle-lane of London's infamous ring road (an event almost as palm-moistening as unexpected lock-stops oversteer in the wet). Thankfully it found just enough revs to get me safely across to the hard shoulder before coming to rest.

Ironically, the car had done this particular journey between the office in Northamptonshire and my folks' place in Surrey faultlessly many times before. It had also completed three epic trips, one to France, one to the Nürburgring and one to Scotland, without so much as a mild hiccough. So it was an ignominious end, but we'd managed to hang onto it longer than the usual 12-month loan, so when it was trailered off to Caterham, that was that.

It was way back in issue 68 that we set out to decide on the spec for our new long-term Caterham, one that wasn't too expensive and that we could use every day. What we ended up with was a £27,855 R300 Superlight with unpadded seats and four-point harnesses. Oh well. The wide front track and limited-slip diff made it an absolute hoot on a circuit (the R300 became a fixture at evoactive events) but the very stiff set-up also made it fairly punishing on its occupants down a bumpy B-road. Not quite the commuter-friendly, leather-lined SV certain members of staff had envisaged then.

Initially the Caterham suffered for its apparent impracticality. Art editor Chee was one of the few brave enough to put some miles on it as the evenings drew in. Tomalin, for example, frequently claimed that he would 'love to take it home' only to discover a 'pressing engagement' requiring transport with at least three seats.

December arrived and as we made our annual Fast Fleet pilgrimage to a far-flung bar, self-proclaimed man of steel Roger Green became custodian of the R300 for the journey. Everyone else who tried it during the trip came back with a huge grin and tales of sideways heroics, no matter how short the blast, though anyone who drove it for more than 40 minutes ended up speaking very loudly and saying 'ehh?' a lot.

In the wet and grime of winter, the Superlight was slipperier than an eel-shaped soap bar, but also 'the most fun you can have with your Y-fronts on' according to Jethro. On dry roads, the Avon CR500s provided phenomenal grip although for dry trackdays Caterham suggested swapping the front wheels over so that they were running the other way to even-out the wear. If you wanted to abuse the tyres and go sideways then there really was no better car to do it in, as I discovered one glorious afternoon at Bedford when I learnt to go sideways.

I was determined to try living with the Caterham as an everyday car. So for a couple of months, roof down come rain or shine, the R300 was my daily transport with no other cars allowed. I didn't have anyone else to transport so luggage space wasn't a problem, the seats are vastly comfier than they look and you become oblivious to the stiff ride surprisingly quickly. However, once I'd driven home I needed a seriously good reason to get back in again the same evening. Refitting the removable steering wheel and ignition cut-out, doing up the harness, attaching the side screen and locating the awkward ignition barrel was, frankly, a palava.

Driving the R300 every day revealed that, in the same way they might view an Aston Martin, other drivers never seem to bear any ill will towards a Caterham. People would always point and smile rather than pretend not to be looking as they would with a Ferrari, and I was forever being accosted while captive at traffic lights or in a queue, everyone keen to say something about it even if they weren't quite sure what. My youthful enthusiasm did eventually wane, as all the weathered sages of the office said it would, with short trips proving a particular pain, but every time it chuntered and barked into life you still knew that the journey would be an event and your day would be that bit richer for having driven the Caterham.

Problems? Well it did like a drink, the passenger footwell becoming home to a large tub of finest fully synthetic after we discovered just how quickly the 1.8 K-series could neck pints of the stuff. The lacquer on our carbonfibre cycle-wings became very discoloured and manky, apparently due to exposure to the sun. The speedo refused to work after the gearbox-mounted sender became dislodged and the fuse for the nearside rear light blew a couple of times. But none of these problems was exactly insurmountable, unlike the speed humps outside Roger Green's house, which did for the Ram-air scoop. It wasn't the last time the scoop was conked either, and it seemed to get nearer the tarmac each time it was (expensively) replaced. It's said to give an extra 10bhp but the gains aren't startling and as the trade-off is wincing every time you hit a compression we'd go without in future.

Ultimately, despite apparently failing in our intentions to get a liveable-with Caterham, we did nearly 11,000 miles in just over a year, which isn't bad. And when you were blipping-and-snicking downchanges or the fearsome K-series was screaming like a banshee, you really didn't long for squashy seats and elbow-room.