Harry Metcalfe and the Zonda get their first trackday together 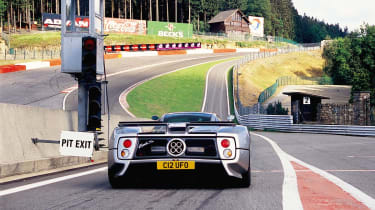 I’d only had the keys to the Zonda for a few days before we were off on our first trackday together, thanks to an invite from Hudsons of London (the UK Pagani importer) to join them and a few of their supercar customers on a special three-day trip to Spa.

Spa Francorchamps is a brilliant circuit; challenging, fast and flowing, there’s simply no other track like it in the world. It’s easily my favourite circuit to drive on. Except, that is, when it’s wet and I’m driving a car that’s worth more than the average house…

So it’s a relief when the first day of the trip dawns clear and dry. Sitting outside the Stoke Poges Club House when I arrive are a brace of SLRs, a Zonda Roadster, several tweaked 911 Turbos, a new M5 and a 612 Scaglietti – to name but a few – all sparkling in the suspiciously bright sunshine.

Quite a few of this select party of 18 cars have just returned from this year’s Gumball rally and look suitably ‘used’. One Murciélago has a giant heart on its roof with a CB aerial poking out of it, while the white 612 has a striking orange stripe running down its entire length. Somehow I don’t think it left Maranello like that…

The first day is taken up with the journey to our hotel in Spa, cleverly routed via a very fine fish restaurant in Brugge. Chatting to the others in the party over lunch, it turns out most have never driven on a track before, let alone Spa, but have come along to see what all the fuss is about.

The Zonda Roadster owner quizzes me on the Bugatti Veyron – he’s got one arriving in a few weeks’ time – while another Murciélago owner tells me how his car arrived a few days late for the start of last year’s Gumball but he still managed to get it to Sicily for the last leg of the event. When he arrived he promptly stuffed it into a barrier (oops) and, despite incurring £130,000 of damage, the insurance company chose not to write it off. A year later it was rebuilt and he completed this year’s Gumball in it before flying it back from America to do this event, spending nearly £70,000 on air fares in the process. It’s becoming obvious that this is going to be like no other trackday I’ve been on before…

Next day we’re straight over to the track. Some of our party overdid it the night before, so there’s only ten of us and we’ve got Spa to ourselves. Fantastic. My first lap is a bit of a shock. To state the obvious, the Zonda is blindingly quick round here. My last visit was in the 340R, in which a lot of the track could be taken flat, but in the Zonda entry speeds are a whole lot higher. In fact, the pace around Blanchimont 1 and 2 is, frankly, frightening. Turning blind into ‘2’ at over 135mph is a particularly surreal experience.

By the end of the morning I’m exiting Eau Rouge at around 130mph and seeing 175mph along the straight before braking for Les Combes. I knew the Zonda was going to be exciting, but this is sensory overload!

It only takes a few quick laps for the brakes to start to wilt, with a spongy pedal stretching the braking point a little further with each additional lap. Over lunch it’s suggested that I have the brakes bled at the local Renault garage – being next door to the circuit means they’re used to working on exotica, with racers regularly rubbing door handles with diesel Méganes. It appears to do the trick, and with the brakes seeming a lot better, I start driving a bit harder. This is why I’ve driven 500 miles to be here: perfect weather, a Zonda at full cry and Spa almost to myself. Bliss.

I know one of the resident instructors wants a passenger ride so I dive into the pits to pick him up. We complete several hot laps, but then the brake problem reappears. As I slow for the Bus Stop chicane near the end of a lap I notice that the brakes are starting to go off again. There’s nothing for it but to let them cool down, so I take it relatively easy round Eau Rouge and down the long straight.

Something makes me try the brakes early for Les Combes and, to my horror, the pedal goes straight to the floor. I frantically pump them, but there’s nothing doing and Les Combes is getting closer. I shout to the instructor, ‘We have no brakes!’ and pull the handbrake on as hard as I can. This is not good. I’m getting close to the turn-in point and I’m still doing around 130mph. There’s nothing for it but to put the car into a spin to scrub off some speed. Choosing my point carefully, I yank the wheel over to the right, unsettling the car enough to start it spinning. I desperately try to keep sight of our surroundings as the car rotates down the track and across a gravel ditch before ending up at exactly the right point for getting through the next corner.

My heart is racing but there’s also an overwhelming feeling of relief at having escaped without hitting anything. My passenger seems remarkably calm too, saying I did all the right things, but all I want to do now is make it back to the pits.

Once the brakes have cooled down, I go out again to calm the nerves. After another slip at the Bus Stop, I conclude that the Zonda is a reluctant track weapon in standard guise. It’s blisteringly quick down the straights, naturally, but there’s a distinct road bias that makes it feel slightly at odds with this sort of activity. The ultra-quick turn-in seems to unsettle the rear slightly, as if the back-end has been set-up a little too soft. The optional ceramic brakes suddenly seem like a very good idea, too…

Once I get back to the UK, Hudsons take the car in to investigate the brake problem. It seems both the discs and the pads were right on their wear limits and the worn pads had caused the brake fluid to boil. The knackered standard pads are replaced with a harder set and the brake fluid is changed as a precaution. The worn discs stay, though, as the car is going to overwinter at the factory in Italy and I want to see what Horacio Pagani has got in his parts bin before I fit standard items agains.

It was a great trip, though, with good company, brilliant venues and plenty of time on track. We all agreed we must do it again next year. I just hope it’s someone else’s turn to provide the entertainment next time around.