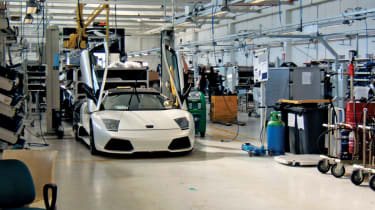 Thanks to the renaissance of the supercar in the last few years, there’s a much wider choice of weaponry available to the lucky punter these days. But a Murciélago is a hard act to follow, and when it came to choosing a replacement I pretty soon whittled the contenders down to just three.

Pagani’s Zonda F is, of course, quite literally a work of art but, at well north of 400 grand, it was never really a contender. But geographically we were in the right area. Given my weakness for all things Italian, my attention then moved just a few miles down the road to Maranello. As the reigning evo Car of the Year, its credentials were never in question, and Ferrari’s 599 GTB pushed most of the right buttons. With 600-plus bhp and an engine straight from the Enzo, this had to be a serious proposition.

It didn’t happen, though, and for two reasons, both of which I hasten to add are down to personal taste. Firstly, I’m just not a fan of the trend for loading a supercar with as many gadgets and electronic driver aids as possible. Contradiction in terms, methinks. Secondly, rather like Marmite, try as I might I just can’t get used to the design of the current range from Maranello. Call me old-fashioned, but in my book a supercar should preferably be mid- engined, and should certainly slap you round the face with its looks while flicking two fingers at everyone else. So, to clarify, the criteria were Roman ancestry, a V12 just in front of the rear wheels, a design that left you weak at the knees, and a price that was only in the lower stratosphere. Which left only one contender.

Lamborghini’s LP640 first appeared at Geneva in 2006. It had been rumoured it might be a superlight version of the existing Murciélago – in fact we’re still waiting for that car – but with 631bhp and an even more aggressive look than before, nothing else came close as an overall package for the money. So with the decision made, a call was put in to Lamborghini Manchester. Bearing in mind that my old Murciélago was still residing in the garage, albeit in semi-retirement, I’d asked a Gallardo-owning friend if he was interested in going 50/50 on the LP640. Supercar-sharing with a friend works very well – simply split the costs down the middle and each drive the car alternate fortnights. I’d done it before and it works a dream just so long as there’s a set of rules in place that avoid scrapping for the keys. After shelling out a five-grand deposit, all that remained was to wait.

Six months later and a letter dropped on the mat requiring a specification. It’s a shame Lamborghini has fallen in with the general trend towards offering boatloads of questionable options. Only a few years ago the options list for the Murciélago consisted of interior trim, exterior colour choices and not much else. Now you’re offered branded luggage (£2350), USB interface (£399.50), asymmetric interior trim (£1292.50, whatever that is,) iPod preparation (£552.25), and that’s just the start. All sounds a bit like speccing-up the USS Enterprise.

Query these with any manufacturer and they’ll mutter about customer demand. Nope, a Lambo should be as raw as a slab of steak tartare. So it was a No to all of the above, thanks, and out with paddleshift gearchanges, out with ceramic brakes, out with satnav, and in with good old consistent and progressive steel brakes, and in with a proper gearshift complete with a third pedal. I also opted for the standard ‘Roadster’ type wheels, but painted titanium (£1057.50) and set off with yellow callipers (£681.50). And then I went a bit daft. The carbon pack (£5205.25) looks the nuts, so that was in, and ditto the glass engine cover (£4312.25). Which left the colour scheme. Although the exterior in ‘out of range’ Pearl White (£4700) could be seen as moderately sensible, the interior on this Lambo most certainly wouldn’t be. Plain black inside? Nah, boring. Bright yellow? Well, why not? Lambos are known for their crazy colour schemes; this one would be mad on the inside rather than the outside for a change.

Next thing to sort was the finance. Supercars have happily become a little more affordable since the advent of tailor-made packages, and since interest rates are still relatively low it makes sense to take advantage. Mark Stephens at London Asset Finance, which specialises in funding supercars, came up with numbers that weren’t too painful.

In the meantime, delivery times on the LP640 were extended more than once as the supplier of the carbonfibre bodyshells went into administration. (Ironically, this also affected Ferrari’s 599 production, as the same company supplied Maranello.) In April, however, my LP640 was finally allocated a production date. I’d been trying for months to persuade Lamborghini’s PR dept to let me document the build – photography is strictly forbidden within the factory and customers are also strongly discouraged from viewing their own cars being assembled (imagine if a technician accidentally dropped a spanner on your pride and joy) but after some lengthy phone calls they kindly agreed.

The end of June saw LP07 EVO finally begin the build process. LP640 assembly consists of two lines at the rear of the factory, the bodyshell itself being delivered to Sant’Agata already painted and ready to begin its two-week trip through the factory on a four-wheeled trolley. Apart from a couple of cranes to lift in the huge 6.5-litre V12 and gearbox, machinery is conspicuous by its absence. Finally, after lengthy road tests, the call came in late July to say that LP07 EVO was ready for collection…

Next time: the 1000-mile drive back to Blighty – and how initial impressions were turned on their head just a few days later.