A quiet welcome awaits our small party in Italy 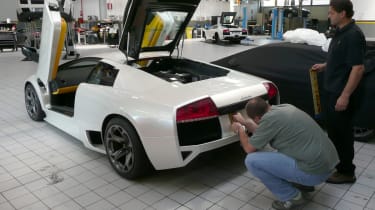 August is never the best time to visit the supercar region of Italy, as most of the industry shuts down for a month-long summer break. Hence we receive an unusually quiet welcome when our small party, armed with a set of registration plates and a tax disc, arrives at Automobili Lamborghini.

Workshop manager Claudio Tomassini is here to meet us, though, and as he guides us over to the service centre, just to the left of the main factory complex, he confirms that both the recently repaired SG54 (my ‘old’ orange Murciélago) and the new LP640 are brimmed and ready to go.

Former chief test driver Valentino Balboni has also kindly called in to offer some advice on the new car, and it’s with a knowing grin that he lists the main areas that are likely to feel different to the earlier 6.2 Murciélago.

Ensconced in the black and yellow Schedoni leather seats at last, I’m eager to get cracking (work commitments mean we can spare only 48 hours to cover the 900-odd miles back home). Twisting the chunky key a notch, it’s obvious more vocalists have joined this Italian opera. The new sound isn’t particularly musical though, the loud whine emanating from the rear resembling a Dyson vacuum cleaner. It turns out that a pump has been added to ram more air through the cats prior to take off.

Another notch, and there’s the familiar drill-like whine of the starter before the 6.5-litre V12 fires into life and immediately settles into a slightly uneven idle. Slotting the aluminium gearlever into first, ready to pull away, it’s apparent that the ‘drive by wire’ throttle is a little more sensitive than that of previous Murciélagos. It’s now even easier to give it too many revs and look foolish, or too few and bog down as a result – neither of which you want to do with Balboni watching! Plant your boot on the loud pedal in SG54 and it seemed an age before the needle caught up. Try the same thing in the LP640 and the response is an instant, superbike-like retort that has the rev needle fairly whipping round the restyled dial.

Half an hour later and we’re pointing the two Murciélagos’ noses out of the factory gates, aiming for the nearby autostrada. Unfortunately, both cars are restricted to 4500rpm for the first 1000 miles, but since that equates to about 130mph in 6th gear, it shouldn’t slow us too much.

We’re soon making better progress than expected, the traffic immediately moving to the right upon seeing the two Lambos closing in. But then, just north of Milan, the first problem materialises as the ‘check engine’ lights appear on the LP640’s dash. Not good news. I’m relieved when they disappear almost immediately, since they are never a good omen, but exasperatingly they’re soon replaced by a flickering seatbelt warning light, which resolutely refuses to extinguish.

Shortly after, a flash of SG54’s xenons in the rear-view mirror signifies that it’s time for the first of five fuel stops. Since both cars had full tanks when we set off, it’s interesting to note that the LP640 seems only a touch more thirsty, the onboard computer showing a remaining range of 40 miles to the 6.2’s 65.

Returning to the cars after a quick sandwich, we’re bombarded with questions by enthusiastic camera-phone-equipped Italians. This, of course, is a country that cherishes its own, so it’s no great surprise that the LP640 is repeatedly recognised for what it is.

Moving off from the service station, my mood takes a turn for the worse when I find the handbrake very stiff to release – and a warning light indicating that it is still on. A visual check confirms that the pads aren’t actually in contact with the discs, but I can’t shake off the feeling that this and the other, albeit small issues aren’t something becoming of a £200,000+ supercar.

We’re soon rapidly covering ground again, and before we know it we find ourselves at the Swiss border, stopping to pay the obligatory motorway tax of around £30. With the Murciélagos still awaiting clearance to pass through the barriers, it’s becoming obvious from the nods and gestures in our direction that the immigration staff are taking more than a passing interest in us. When an armed guard strides over to the LP640, I fully expect to be told to empty the boot of its contents. Instead I’m asked politely if this is the new replacement for evo’s Murciélago! After overcoming my astonishment and readily agreeing to a couple of shots of both cars, we’re off again, and heading for the 2092m-high St Gotthard pass.

Even with the windows up, the huge difference in sound between the two cars is becoming obvious. OK, so the 6.2 is Tubi-equipped and the 6.5 has a factory exhaust, but that can’t be the full story. In sharp contrast to SG54’s rumble, the LP640 has an almost (dare I say it?) Ferrari-like howl. It’s a lovely note, though. Throw in the ever-present gear-whine that rises and falls a couple of octaves above the V12, plus yet another new sound, this one like a jet spooling up for take-off, and you almost want to pull out the fiddly new Kenwood stereo and bin it. After all, when would you ever use it?

As we near the Gotthard pass I make sure I don’t make the same mistake as last time I was here, in the orange Murciélago, when I missed the sign for the pass and ended up rumbling slowly through the 18-mile tunnel – a hellish experience that had me alternately cursing and coughing for most of the 40 minutes it took. This time I don’t miss the turn, and with xenons ablaze and the first of many long snow- tunnels looming up ahead, it’s difficult to concentrate on the job in hand, what with the truly spectacular alpine scenery above and below. Glancing in the LP640’s huge, redesigned wing mirrors, I see the air scoops on both Lambos lower in response to the falling outside temperature, the cold air at this higher altitude negating the need for extra cooling.

At the summit there’s time for an espresso at the excellent café overlooking the lake – not that we need to be kept awake given our mode of transport – before beginning the long descent on the other side. Since progress has been faster than expected, we decide to continue on to Strasbourg, just over the French border, and with the trusty TomTom counting down the miles it isn’t too long before we’re sat in the bar of the Holiday Inn, enjoying a few Peronis and reflecting on the day’s events.

Watching the heat hazes rise from the still-warm V12s parked directly outside, the talk is of disappointment with the LP640’s niggling electrical issues. As the 4500rpm limit means the new car’s full performance can’t yet be judged, I also can’t help musing over whether acquiring the car was the right thing to do at all. OK, the brakes are noticeably sharper, and it feels more surefooted, but is the price – way more than the Murciélago 6.2’s cost – worth it?

Maybe I’m being hasty, but I’m certainly yet to be convinced. If SG54 had been a favourite pipe and a pair of comfy slippers, then at this moment LP07 is a flash designer suit that doesn’t quite fit. Ah well, it’s too late to change my mind now…

The rest of the trip back to Blighty (including the typically excellent SpeedFerries crossing) is largely uneventful. Soon after arriving back home, LP07 is karted off to Lamborghini Manchester so that the niggles can be sorted out. And I’m pleased to report that, with it’s first (free) service done, the handbrake adjusted, a new seatbelt buckle fitted and the electrical systems checked, LP07 is in rude health.

Good job too, because in just a few days’ time it’s due to perform ‘hot lap’ duties at Elvington, near York. Maybe it’ll start to grow on me there…