Lotus has given more details about the forthcoming Esprit which will feature an all-new V8 engine and will be on sale in 2013. 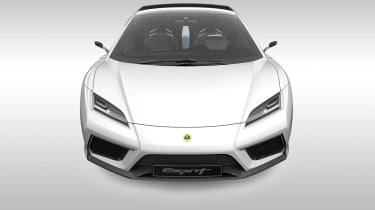 Lotus has used the opening of the new test track at its Hethel headquarters to give some more details about its future model plans.

The company has confirmed – as previously reported by evo – that the new Esprit will have a Lotus-developed V8 engine instead of the Lexus LF-A powerplant it was originally slated to use. Development of the new engine began last November and it’s due to be fired up for the first time in August as part of the aggressive development schedule which will see the new mid-engined Esprit launched in March 2013.

The engine, which is being developed in conjunction with an unnamed partner, is a 90-degree naturally-aspirated 4.8-litre V8 featuring a flat-plane crank and developing 560bhp and 399lb-ft of torque. Lotus reckons the Esprit will be able to accelerate from 0-62mph in 3.4 seconds and from 0-124mph in 9.0 seconds and have a 204mph top speed. The company is also aiming at a £168,500 pricetag.

Lotus CEO Dany Bahar also confirmed that development on the new Lotus Elan has been delayed and that the project has been pushed to the bottom of the company’s development schedule. In the meantime development of the Evora will continue – originally it had been slated to be replaced by the Elan in 2015 – with more powerful versions set to be introduced.

And the company also revealed it has given the green light to its city car project, now named as the Lotus Ethos, and set to be developed alongside a Proton sister as either an all-electric or ‘range extender’ model.