It’s hardly been a sales success for Lotus, but is a used Europa a viable alternative to the more obvious second-hand Elise? 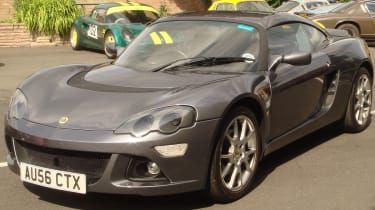 First off, the Europa looks much better in the glassfibre than you might expect. The coupe-like profile view is probably best, just beating the sight of the turbo-enhanced 2-litre engine beneath the sloping rear screen.

This car was registered in December 2006, making it one of the very first Europas. Originally owned by someone at Lotus, it had its first service at the factory. Having gained another owner since then, it has now covered nearly 12,400 miles and has lost precisely £14,000 of its original value.

The car’s overall condition is very good, just the occasional Lotus build quality issue letting the side down: the gearlever surround moves as you change gear and the engine feels a bit vibratory at tickover, but both are common complaints on Europas.

The cabin is certainly easier to get into and out of than an Elise’s, but it hardly feels ‘premium’ inside. That said, the first thing that strikes you when you go for a drive is that you can actually hear the standard-fit Blaupunkt radio/CD player (which has sat-nav built in) – a first in a Lotus for me! Then you notice that the turbo engine beefs out the low-rev engine response nicely, although higher up the range it doesn’t feel as strong as the claimed 197bhp would lead you to expect. However, this engine is very tuneable, so upping power is much easier (and cheaper) than on an Elise, so this is easily sorted.

It’s still a brave choice, but at this price it’s much easier to justify than when it was new.

Find a used Lotus Europa for sale on the Classic and Performance Car site.

With thanks to Vendor: Paul Matty Sportscars, Bromsgrove (01527 835656, www.paulmattysportscars.co.uk)

• Exterior Dark grey metallic paintwork in excellent condition, wheels unmarked• Interior Posher than an Elise, with leather for the seats, parts of the dash, door trim and side pockets. The floor is partly covered in carpet too!• Mechanicals Car will be serviced when sold; engine makes mirrors shake at tickover but all Europas do this• Should I buy it? Represents good value compared to new price. Think of it as an Exige that’s easier to live withFOR: It’ll look good on your driveAGAINST: No one will know what it is