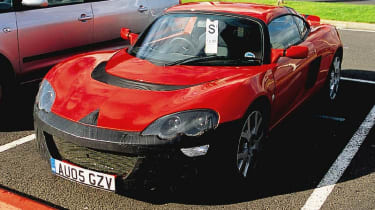 Due to our production deadlines we can't bring you official shots of the new Lotus Europa coupe, but this lightly disguised development hack gives a pretty clear view of what the Elise-based GT looks like in showroom form.

Although it uses a familiar undercarriage, the Europa is said to provide a different driving experience to the Elise, thanks in part to greater attention to NVH (noise, vibration and harshness), but also because it uses the torquey 2-litre turbo unit from the Vauxhall VX220. But Lotus bosses promise that it will remain faithful to the marque's driver-focused ethos. Although equipment levels will be more generous than those of the Elise, our exclusive cabin shots show that the interior holds no real surprises. In common with the 2006 model year Elise and Exige, the Europa will have the option of airbags and leather, and will come as standard with ProBax seats, air-con, switchable traction control and extra soundproofing.

A glass hatchback gives access to the engine bay but, unlike this development car, the production version of the Europa will have a cover over the engine and luggage space in the tail. The Europa has its first public airing at the Geneva motor show in March and should be on sale by mid-2006. Prices are expected to start at around £32K.