3.5-litre 276bhp Toyota V6, 2+2 seating, GT levels of refinement and usability, and a £45K starting price. We get an exclusive look at the Lotus Evora and the company's exciting future 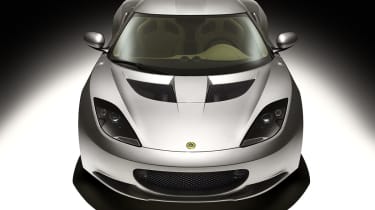 There’s an infectious buzz around Lotus’s Hethel HQ. The all-new Lotus Evora is a fortnight away from its first public airing and the team behind it are clearly confident that they’ve achieved something special. It’s not smugness exactly, but equally no-one here looks the slightest bit anxious about what the waiting world will think of their baby.

And this time the whole planet really will be watching, for the Evora will be Lotus’s first truly global product, having been designed to achieve type approval from South America to China and everywhere in between. The car formerly known by its ‘Eagle’ codename is the most important Lotus since the Elise was unveiled 13 years ago and heralds the marque’s return to the GT market. For the men from Potash Lane and Lotus enthusiasts alike these are momentous days.

When we arrived for our sneak preview of the 2+2 mid-engined coupe there was a genuine crackle of excitement about the place as they made their last preparations before the London Motor Show unveiling. After two years of hard work and secret development, the wraps will shortly be tugged off the car that heralds a new era for Lotus, one where it will no longer be dependent on the ageing Elise platform and instead move towards a three-model line-up that will eventually include the new Esprit (see panel, p25). Lotus is targeting 2000 sales per annum for the Evora, with a starting price of £45,000 rising to just over £50K.

If first impressions count, then all that confidence is not misplaced: I reckon the Evora will bowl over the ExCeL crowds. It’s striking from every angle. The tension in the lines and curves is pure Lotus and the proportions just so, a remarkable achievement when you consider that behind the front chairs are two further seats, a transverse 3.5-litre V6 Toyota engine and a boot large enough to swallow a set of golf clubs.

‘We didn’t actually design it with the clichéd clubs in mind,’ says Russell Carr, the project’s chief designer, as he walks us around the full-size clay buck. ‘There are no golfers here.’

The initial sketches were penned in August 2006. ‘Our brief at that time was simple and clear,’ Carr continues. ‘We had to create a visually stunning car that had everyday useability and plus-two capability. The looks were the biggest challenge; first and foremost buying a Lotus has to be an emotional purchase, so despite the necessity for a longer wheelbase and higher roof-line it had to still look like a great sports car rather than a passenger carrier. The extra practicality has to be a bonus that doesn’t compromise the sense of purpose. We have an extraordinarily talented team of engineers working on dynamics so our job was to show that none of that driver focus had been lost through adding seats.

‘It has to look like a Lotus but still move the game on. It couldn’t be retro but had to incorporate heritage elements, so it begins with the squashed Lotus ‘mouth’ – which can be traced back to the 25 of the ’60s – and everything flows from there. Top speed and motorway driving are more important with the Evora than the Elise, so smooth aerodynamics to keep the airflow attached were vital for efficiency. That meant we couldn’t use the Coke-bottle lines, but we still had to keep everything taut and maintain the feeling that the bodywork has been stretched over the mechanicals. And do all that while appealing to a wider market of drivers by making it useable for everyday living.’

A number of visual tricks that have been used to disguise the extra practicalities: the larger rear wheels (19in at the back with 18in fronts as standard) and the long front and short rear overhangs are designed to suggest movement even when the car is stationary, while the wrap-around ‘visor-screen’ and the crossover line where the side-glass meets the rear screen disguise the height of the roof.

Carr makes no apologies for the awkwardness of access with the Elise, describing it as part of the race-car experience. The Evora, however, is not primarily a trackday tool and therefore has a higher opening line at the top of the door so you don’t have to duck to get in. Similarly the sill is lower and narrower and the seat sits some 65mm higher off the floor than in the Elise. It all improves access to the cockpit – and comfort when you’re in there. For the first time the 6ft 5in frame of CEO Mike Kimberley will comfortably fit behind the wheel of one of his own cars. ‘Either Mike was going to fit or one of us was no longer going to fit in the company,’ laughs Carr.

The London show car is still being assembled during our visit – or rather it’s being converted from one of the 19 first-stage prototypes (all of which were built on the production line to hone tooling and build techniques) – preventing us from either photographing it or climbing inside. I can report, however, that those larger doors close with a satisfying, Audi-esque thunk.

There’s also an interior buck to try for size while its designer, Anthony Bushell, guides me round. The Recaro seats are a little larger than those in the Elise and there’s more shoulder room between the driver and front seat passenger, while the dash is formed from leather and aluminium – ‘proper materials’ as Bushell puts it. Even on this mock-up there’s a quality feel, all the switches are edge-lit to replicate those found on top-end hi-fi systems and a central touch-screen will operate all radio and sat-nav controls.

The interior configuration apes the themes and lines of the exterior with a ‘floating’ centre console and a contrasting band that runs from the dash right around the cabin and across the rear seats. These sculpted pews are similar in size to those found in the back of a 911 (you get the feeling the team have spent a lot of time looking at the 911 even though they claim the closest competitor is the Cayman). It means they’re large enough for children (and will have Isofix fittings) or for an adult to travel a short journey sitting sideways. If you think they’re a waste of time, you can have your Evora as a two-seater (Lotus calls this option the Plus Zero). Chassis next, and vehicle architect Richard Rackham is on hand to explain the exposed underpinnings of the show car. The Evora shares the bonded aluminium technology that Rackham pioneered on the Elise, but unlike that 13-year-old design it’s built in three independent modules: a central tub and sections for the front and rear. This not only saves money when it comes to crash repairs, it also makes construction quicker and more efficient, as these parts can be built simultaneously and independently. Chassis rigidity is another boon: Rackham says the Evora is two and half times stiffer than the Elise. And the added versatility of building the structure in three sections makes it easier to fit a variety of powerplants in the future.

At 2575mm, the wheelbase is only 275mm longer than its little brother and into that they’ve squeezed 75mm of extra seat travel, those rear perches and a considerably bigger power unit.

The 3.5-litre Toyota V6 is just the start for the Evora. Future options include hybrid power, while Kimberley is very enthusiastic about the Lotus-built Tesla. ‘You can’t ignore the environmental issue,’ he says. ‘Chapman’s ethos of lightweight, efficient sports cars has always kept us ahead of the game in that respect. It’s our job to continue to be innovative and combine that with a car that is friendly yet entertaining to drive.’ CO2 emissions are low: Lotus quotes less than 225 g/km for the VVTi engine running under the command of its own ECU. Helped by a drag co-efficient of just 0.337, the Evora returns above 30mpg on the combined cycle.

Right now the team are keeping tight-lipped about performance: 0-60mph is said to be in the sub-five second bracket. Kerb weight is estimated at 1350kg (split 39/61 per cent front/rear) if you go easy on the options. With a surprisingly modest 276bhp on tap from the 3456cc V6, that gives a power-to-weight figure just below that of the Cayman S.

Recent tests at the Nürburgring have enthused Kimberley even further, the unflappability and strong performance of the four-pot AP Racing brakes having been a particular highlight. All Evoras will have stability control, but pressing the Sport button just to the right of the steering wheel will allow for a greater slip angle before it intervenes or alternatively it can be switched off completely.

The first cars will all come with the regular Toyota six-speed manual, but one of the first developments will be a US-friendly auto box with steering wheel paddles. Other future developments will include a race car, so expect a GT challenger sometime soon, plus further more extreme derivatives and a convertible. All these models are to sit alongside the £70K-plus range-topping and platform-sharing Esprit, due to be with us in around three years from now. Following the motor show there will be a phase of verification testing and final refinement before the first cars are delivered at the very end of the year. As I turn to leave, Mike Kimberley promises us an Evora drive soon. Exciting times indeed.