Getting to grips with a 700bhp, 220mph tyre development car 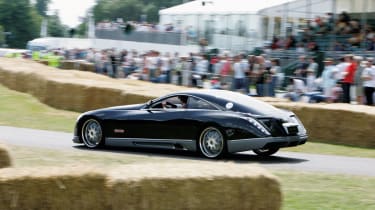 Good grief, it’s enormous. That's all I can think as I approach the 5.9-metre long Excelero from the back of the garage. There’s a TVR Sagaris parked beside it which is so tiny it looks more like a tender to the mothership towering above it.The Maybach Excelero was built for tyre company Fulda as a test vehicle for the development of high-speed tyres, just as happened back in 1939 when Fulda had a unique Maybach coupe built to test tyres beyond 200kph for the then newly built autobahns. Unfortunately that car disappeared during WW2, but to celebrate 100 years of Fulda tyres they decided to build another high-speed test car in the same mould.

The Excelero's body was built in Italy by Stola in carbonfibre, yet it still manages to weigh over two and a half tons. Its underpinnings borrow heavily from the Maybach production car.

There’s a crowd gathering now, waiting for the beast to be started; paddock gossip has it that the tweaked 700bhp 5.9-litre V12 sounds terrific.

Clamber inside, twist the key and the engine snarls into life via the sill-mounted exhaust outlets (you couldn't call them silencers!) on either side.

Once down at the practice area I take a brave pill and disable the ESP to see if this £4 million coupe is up for it. It soon smokes its tyres, but trying to hold it on the brakes seems to cut the power. At the start line I try again, but it seems the ESP cuts back in as soon as you touch the brakes, so the smoke stops and it stutters off the line. Shame.

There’s a degree of looseness built into the steering to help keep things calm at its 220mph top speed, but it does nothing to help me guide it through the twists and turns of Lord March’s devilish drive. Still, at full volume it sounds fantastic, so I keep it nailed for as much of the run as I can - 700bhp is enough to make even this monster shift, and as we blast through the finish we catch the car in front. Trouble is, René Arnoux is on my tail in a Mégane Trophy racer, so my elation is short-lived.

By the time I get down the hill and park up, I’ve grown rather fond of the beast. It manages to look both grotesque and wonderful at the same time, which is a very neat trick. Let’s hope they don’t lose this one. HM