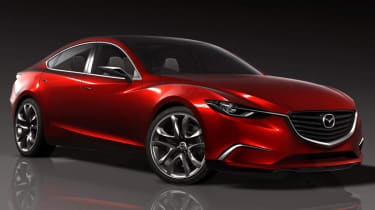 Mazda has unveiled its new saloon, the Takeri. It’s a sveltely styled concept car that previews the next Mondeo-rivaling Mazda 6, and to our eyes looks a little like a shrunken Infiniti with extra creases and bolder lines. No bad thing, that. It’s said to exhibit ‘KODO’, Mazda’s new design language which makes its production debut on the new CX-5 crossover which was unveiled at the 2011 Frankfurt motor show. The production-spec Takeri will not only share styling cues with the CX-5, though; it will be brimming with Mazda’s Sky Activ technology, which comprises highly efficient petrol and diesel engines, new manual and automatic transmissions and lightweight chassis components. There’s also a regenerative brake system that recoups energy under braking to power the car’s electrical equipment. The Takeri concept gets a Sky Activ diesel engine, while the production version will feature a range of petrols and diesels with the technology. While no bhp or torque figures have yet been revealed, they’re all set to boast 14:1 compression ratios to combine lively performance with seriously impressive CO2 and mpg figures. The CX-5 launches next year, and we can expect to see an all-new Mazda 6 towards the end of 2012. The Takeri will be the star of Mazda’s stand at next month’s Tokyo motor show.