It's no Impreza, but Mazda's hardcore saloon is heading for the UK with serious credentials 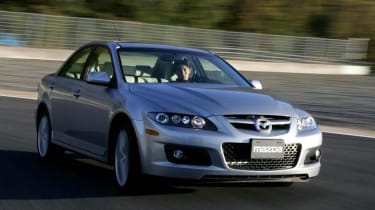 Let's start with some word association - ready? Okay - 'Mazda'. If the company's marketeers are to be believed, then the words summoned forth should be 'dynamic', 'athletic' and even 'purposeful'. No? Well, maybe that's where the Mazda 6 MPS comes in. In the age of The Brand, a car isn't allowed to just be a car. It's got to be an expression of the core values of its parent company. Which is why the 6 MPS exerts an importance far greater than its modest sales targets would imply. If people like us take this car seriously then, the argument goes, our friends and relatives are far more likely to look favourably on the 2-litre diesel. Don't believe it? Mazda does. Hero car the MPS may be, but turbo reprobate it ain't. We're instructed not to think Evo or Impreza before we've completed our first lap of the TI Aida circuit in Japan. The MPS doesn't have a competition heritage, but it's meant to be more subtle, more restrained, slightly more cerebral. More of a BMW 330i or previous generation Audi S4. It's certainly discreet. The aggressively body-kitted concept of 2002 has been transformed into a far more conservative production reality. Big difference is an all-new front end, a raised bonnet and a 45mm increase in height necessary to accommodate the intercooler that lives on top of the engine. Ultra-subtle? Or plain boring? This is no bodykit special - a serious engineering investment has been made. The bodyshell has been reinforced with various strut braces and welded-in plates, increasing torsional rigidity by a staggering 50 per cent over the standard car. Spring rates have been increased by 25 per cent at the front and 33 per cent at the rear, suspension mountings have been reinforced, bushes made firmer. Pretty much the A-to-Z of 'Make Your Family Saloon Handle.' Hopes are high. VW has beaten Mazda to the market with its turbocharged direct-injection petrol motor, but only just. Ford's cavernous parts bin has supplied the 2.3-litre unit's block, but almost everything else is bespoke to the car, including a new cylinder head, Hitachi turbocharger and the intercooler. The stated ambition is to offer the same degree of throttle response as a normally aspirated engine. Fuel economy is also pretty decent (by Evo and Scooby standards), with a claimed 27mpg combined, while quoted figures of 257bhp and 280lb ft stack up well. Transmission is via a new six-speed 'box, with a power take-off running via a propshaft to the rear wheels, an electronically controlled coupling back there grabbing up to 50 per cent of available torque. The track beckons. Aida was only built in 1990, but is already pretty much moribund (thanks to its location 50km from the main road). It was even home to the Pacific Grand Prix back in 1994 and 1995, Ayrton Senna taking his last F1 victory here on the combination of slow corners and straights. A definitive verdict certainly isn't in prospect. The cars are hard-working hacks, already thrashed by Hungarian journalists. Think broad strokes, not intricate brushwork. The must-be-right performance car stuff is here. The gearshift moves through its gate with a nice, crisp action, and throttle and brake pedals are well placed to heel-and-toe. Steering is dependable and accurate, although the low-geared rack comes straight from the standard car (with slightly more viscous PAS oil) and makes for lots of arm twirling. On these mostly shot Bridgestone Potenza 215/45 18s there isn't much steering feel. The engine offers a decent amount of shove, but on a wide, open, racetrack it certainly doesn't feel 257bhp-fast. Throttle responses are very linear and, as claimed, there is no turbo-lag. Sadly, there's also no noise in the cabin. Handling? That's got to go down as undecided. In part, very promising. The combination of tight track and tired tyres doesn't help the MPS's never-ending quest to avoid understeer. Great promises are made for the electronic brain of the active torque-split rear coupling, with its automatic 'Sport' mode, but it didn't make me a drift king. And, as no more than 50 per cent of engine torque can get to the back (where an LSD waits to marshal it further) it's hard to see quite how it's going to. The MPS responds to pretty much everything with varying degrees of understeer. All is not lost, though: the RX-8 felt fairly lifeless during the track section of its launch two years ago, but proved to be a far better road car. Like its rotary cousin, the MPS rides on fairly soft springs (with no-nonsense dampers), so it's likely that on UK tarmac it will be a similar story. When it goes on sale in the UK next September, the MPS is bound to meet its 500-unit-a-year target, and priced at around £25,000 with lots of standard kit, there's no reason to suppose it will cause sleepless nights for the nation's Mazda salesmen. The real conclusion will have to wait until we've driven it on UK roads - and decided whether it is really a worthy hero for the brand.