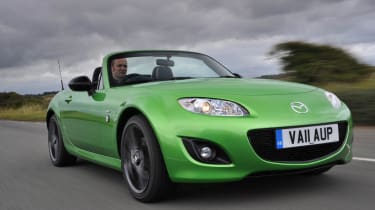 What is it? The Mazda MX-5 Sport Black. It’s a special edition based on the 2.0 Sport Tech Roadster Coupe and inspired by Mazda’s MX-5 endurance racing car. 500 will be made, and it costs £22,995. Technical highlights? While the GT racing car weighs just 850kg but produces 275bhp thanks to heavy engine tweaks, the Sport Black is untouched over a standard Sport Tech. So there’s a simple but vivacious 158bhp 2-litre naturally aspirated engine, a snappy six-speed manual gearbox and rear-wheel drive. The Sport Black’s changes are limited to new paint schemes, gunmetal alloy wheels and a sprinkling of black trim inside and out. It’s only available with a folding hard-top, the Roadster Coupe weighing 83kg more than a soft-top MX-5 but boasting better refinement and more winter weather appeal. What’s it like to drive? The Roadster Coupe isn’t quite as sharp as the lighter rag-top, the softly-sprung MX-5’s body roll exaggerated by the folding roof’s higher centre of gravity. But the Mazda’s dynamics aren’t too badly affected, and it remains one of our favourite sports cars. The engine is light on torque and needs revving, but it encourages you to do so, while it’s linked to a super satisfying six-speed manual gearbox that will reignite anyone’s love of changing gear. The steering is light but precise and the pedals are very well weighted. Each control is high in interaction and communication; all the better to exploit the car’s fine front-engine/rear-wheel-drive balance. How does it compare? At just £360 more than the car it’s based on, the Sport Black represents an affordable dose of distinctiveness for a now familiar looking roadster. The MX-5 itself has very few real rivals; a Renault Wind Gordini costs £16K but is 27bhp worse off and less fun to drive, while basic BMW Z4s or Lotus Elises are nearer the £30K mark. Anything else I need to know? You don’t have to have a Kermit-like colour scheme, with white or red paint on the options list alongside the vivid green of our test car.