We drive the new Mercedes SLK 350 on Tenerife - it's a spectacular place. 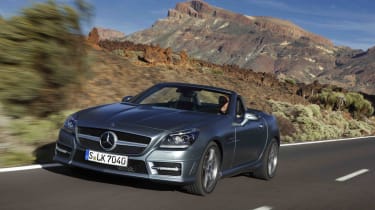 According to the info that Mercedes handed out on the flight to Tenerife, 61 per cent of SLK owners are female and the average age is 50. Which means that I’m not exactly core demographic… However, most of them will be buying the base 200 model (or even the diesel when it’s launched), and with an air of bite-size SLS about its looks I’m hoping that the new SLK 350 might appeal more than the statistics suggest.

The SLS design tweaks are particularly noticeable inside with the four identical crosshair air vents. I probably shouldn’t, but also love the new red pinstripe mood lights that show up in the dark. Outside, I think the SLK’s best angle is from the rear – the nose just a little too big and bluff to my eyes. The SLS treatment doesn’t extend to mini gullwing doors, but the brilliant folding vario-roof does now come with the option of Magic Sky Control, which changes the glass above your head from sun-worshiping transparent to sunburn-avoiding dark at the touch of a button.

The new 60-degree V6 has third generation direct injection and while most of the improvements are seen in the 39.8mpg fuel economy figure and 167g/km CO2 output (there’s also now stop/start) it’s a really smooth and wonderfully punchy engine. Power and torque are only up 1bhp and 7lb ft respectively over the last generation car, but I was surprised by just how strong it felt – it certainly feels good for the claimed 5.6 second 0-62mph time. A seven-speed auto is the only option on the 350, and although it’s not the snappiest ‘box, it is actually better than its bigger brother SLS’s double clutch transmission.

The chassis on our test car had Mercedes’ new Dynamic Handling package, which drops the ride height by 10mm and has continuously adjustable damping that you can switch between comfort and sport modes. My prejudiced image of Tenerife was of package holiday beaches, but inland it has some wonderfully smooth and seemingly eternally twisting roads, (not to mention the spectacular Mt. Teide – an active volcano and the highest point in Spain). Up in the hills the steering is well weighted and fantastically accurate, allowing you to really lean on the grip and take a very precise, clean line through all the tight corners. On the rare sections of ruckled tarmac that I managed to find, the ride was excellent, although there was a slight loss of composure over mid-corner bumps when really pushing on, so it will be interesting to see how it deals with the UK.

There’s no limited-slip diff, so big slides are off the agenda on dry roads, but even ignoring that, the SLK still just stops short of being really engaging when you press on. It doesn’t do anything wrong, it brakes, steers and accelerates extremely well and the whole chassis feels very polished, but the driving experience just feels a little bit one-dimensional after a while. You can really attack a road, but sadly it doesn’t quite involve you or give you options like a Boxster, or, despite the looks, a mini-SLS.