Mercedes has unveiled the new C-class estate, which goes on sale later this year. Details, specs and UK prices here 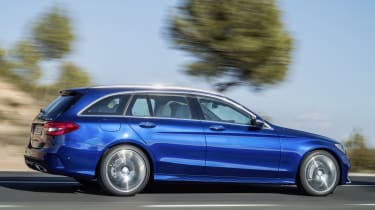 The new Mercedes C-class estate has been unveiled ahead of its arrival in the UK this autumn. Sharing much of its external appearance with the saloon, the new model will be priced from £28,000.

Offering more space, the new C-class estate promises to be more versatile than ever. 96mm has been added to the total length compared with the previous car, partly thanks to a longer 2840mm wheelbase, while the car’s width has grown by 040mm to 1810mm. The results inside are significant, with rear passengers enjoying an increase in legroom by 45mm and more head and elbow space.

Ensuring the rear tailgate can be opened even when hands are full of shopping is an electric ‘Hands-Free Access’ system, requiring a simple wave of the foot under the bumper (Just like the Ford Kuga) for the boot to open. The standard option is an ‘Easy Pack’ system that provides assisted opening at the touch of a button.

Inside the interior is very much C-class, featuring the same dash and seats as the saloon, though a new feature, the Mercedes Connect Me service, has been unveiled in the estate before it is rolled out across Merc’s range. It enables the driver to connect with the car even if they’re away from it via a SIM card, providing the ability to check fuel levels or pre-program climate control settings remotely.

Following these will be hybrid and six-cylinder variants in 2015, all of which will be controlled via the same configurable driving modes found in the saloon. Comfort, Eco, Sport, Sport+ and Individual – which gives drivers the ability to customise settings – offer adjustment to engine characteristics and the weight of the standard variable steering. Drive will be sent to the rear wheels, with markets outside of the UK having the option of a four-wheel drive variant too.

The C-Class is 65kg lighter than its predecessor, whilst suspension options include a standard or sportier steel spring setup. For maximum ride comfort self-levelling Airmatic suspension is also available as an option – the first time this technology has been seen in this class.

After we drove the C-class saloon, we were impressed by its ability to transport its occupants along in fantastic comfort, however the dynamics left a little to be desired. A C63 AMG version may offer an answer, thankfully.

Nothing is officially confirmed, but using the success of the previous generation as an example, it looks likely that Merc will release an estate version of the C63 AMG saloon. Harnessing a twin-turbocharged 4-litre V8 that pushes around 485bhp through the rear wheels is expected. Prices for the super-estate will likely increase on the £60,000 mark for the AMG saloon, with sales commencing before 2016.