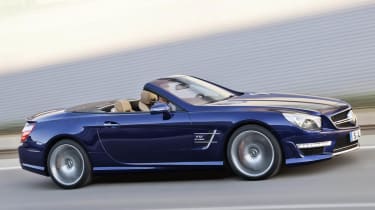 Mercedes-Benz has pulled the wraps off its all-new SL65 AMG. Mere weeks after the SL63 AMG made its public debut at the 2012 Geneva motor show, it’s been replaced at the top of the SL range by a far more muscular sibling. Going against the current downsizing trend at AMG, the SL65 retains the old car’s twin-turbo 6-litre V12 and a prodigious power output – new manifolds, wastegate ducts and a sports exhaust system see power rise from 604 to 621bhp, while torque remains at an electronically limited 737lb ft. Both figures compare very favourably to the new SL63’s 530bhp and 590lb ft in standard trim. They hustle the two-ton SL65 to 62mph in just four seconds – close to current supercar pace – and a typically German 155mph limited top speed. The speedometer climbs past 220mph, though… AMG’s 7G-Tronic automatic gearbox is standard fit, a first for the company’s bi-turbo V12. There’s the usual plethora of driving modes, from ‘Controlled Efficiency’ (aka Comfort) to Sport Plus and Manual. Pop the gearbox in its eco-friendly mode and you’ll have most hope of meeting the car’s claimed 24.4mpg fuel economy and 270g/km CO2 emissions. There’s a stop/start system – there can’t be many of those on 12-cylinder cars – to nominally cut your fuel costs. Despite weighing in at 1950kg, the SL65 is actually 170kg lighter than the model it replaces thanks to a new aluminium bodyshell and carbonfibre bootlid as well as lighter suspension components. ABC active suspension is fitted as standard, with a Sport mode firming the damping and cutting roll rates, and a Comfort mode softening things up for more serene journeys. There’s also electromechanical steering with variable, speed-sensitive assistance. Being an SL, there’s a trick convertible roof, the folding hard top retracting in 20 seconds. Magic Sky Control – a glass roof that switches electronically from light to dark – is an option, while Airscarf neck heating is standard. The all-new Mercedes SL65 AMG goes on sale this Autumn; prices haven’t yet been confirmed, but expect little change from £150,000. It should undercut the less powerful SLS AMG Roadster, though.