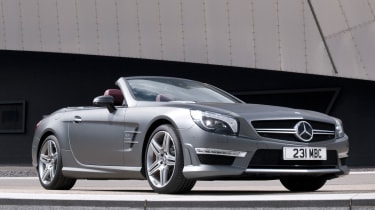 The Mercedes SL has received a round of updates for 2014.

Priced from £72,500 –just over £2500 higher than the SL350 – the SL400 gets 19in AMG alloys and a subtle AMG body kit, while sports suspension comes fitted as standard. Other newly standard features include DAB digital radio and a tyre pressure monitoring system.

There are also spec updates for the SL500 and SL65 AMG, their prices also rising by around £2000. Deliveries of the updated Mercedes SL start in July.