Mercedes has shown off the most powerful version of its range-topping SL, the SL65 AMG, at the New York motor show 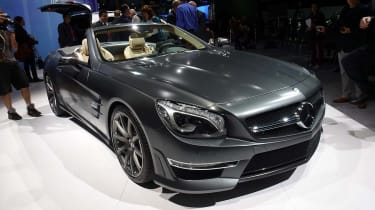 Fresh from showing off the new SL63 AMG in Geneva, Mercedes has chosen the New York motor show as the location to launch an even more powerful, V12-engined version. That’s right, the SL65 AMG is back.

Highlights are pretty much as before. The new SL65 is powered by an evolved version of the previous car’s twin-turbocharged 6-litre V12, which puts out a walloping 621bhp along with – wait for it – 738lb ft of torque. That’s an increase of nearly 20 percent over the previous ’65, and mean that it will be the quickest SL yet. The official 3.9-second 0-62mph time and limited 186mph top speed only tell part of the story – we can anticipate that, in straight lines at least, this SL will likely have the ability to show its posher SLS sister a clean pair of heels. Ceramic brakes will be optional, and Mercedes has finally managed to engineer a seven-speed automatic transmission capable of handling the SL65’s astonishing torque figure – the previous car had to make do with the older-tech five-speeder.

Although pricing hasn’t been announced the SL65 will – as before - carry a towering pricetag – Mercedes was hinting that US buyers will be looking at finding the thick end of $200,000 for one. And the car that was actually shown on the stand in New York will be even rarer, it’s a limited-to-45 ‘45th Anniversary Edition’ (see what they did there?) with unique Magno Graphite matt paint, a ‘twin blade’ radiator grille and a natty carbonfibre rear spoiler.

We’ll bring you more details – and UK prices – as soon as they’re announced.