When Merc and McLaren combined forces, the results were flawed but still fab 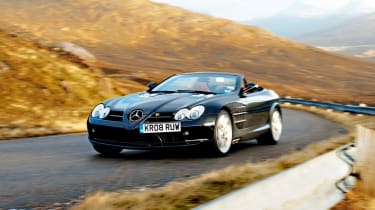 How the SLR ended up as an object of mild ridicule associated with desperate, attention-seeking celebrities rather than a serious sequel to the phenomenal McLaren F1 is a long and painful story. It’s also one that Gordon Murray – captain and opening bat for McLaren at the beginning of the project – would probably rather forget. Suffice to say, it wasn’t the car he envisaged.

Murray’s dream of a V12 was canned early on in favour of a supercharged 5.5-litre V8 mated to a five-speed auto. What’s more, the production car had to remain true to the extraordinarily dramatic Vision SLR concept of 1999, lousy aerodynamics included. This necessitated quite a bit of ‘correction’, some of it out of view (the flat underbody) and some of it not (the rear diffuser and ‘air brake’-style active rear wing). McLaren’s chief contribution was the hugely rigid carbon tub, adapted from its F1 expertise and, indeed, the F1 road car.

The SLR’s signature scissor doors that swung out and up on massive hydraulic struts gave easy access to cabin space that checked in somewhere between cosy and cramped. Those who held off for the subsequent roadster arguably got the better car. With the powered fabric hood stowed neatly in the space behind the seats, it was a fabulous looking thing and still a fireball of presence with dragster overtones and stubby, side-firing exhausts snorting shockwaves of infrabass venom. Pure theatre.

Whichever the model, the SLR covered the distance between one corner and the next like a striking cobra covers the distance between itself and lunch. For all its foibles, driving the SLR was an event that lingered in the emotions hours after you’d walked away. The car F1 partners Mercedes and McLaren built may not have been a great supercar but it was a phenomenon all the same.