With even more power than the McLaren SLR, the Mercedes SL65 AMG Black was AMG showing its wicked side 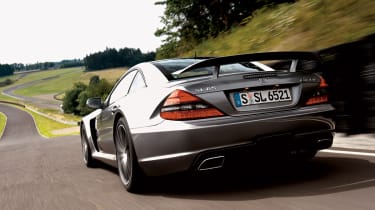 The SL65 Black has the presence of a flame-thrower in a ticker-tape factory. It doesn’t even look much like the car it’s based on. Apart from the grille, lights and doors, the SL bits have been completely subsumed by the mostly carbon Black Series bits, which add girth, attitude, price and exclusivity in unprecedented quantities but, via some clever re-engineering and ditching the folding Vario roof for a fixed one, cleave a handy 250 kilos from the kerb weight, too.

You’d imagine that the benefit of this – along with a hand-built 6.0-litre twin-turbo V12 generating 661bhp at 5400rpm and a capped torque output of 737lb ft between 2200 and 4200rpm (otherwise it would be a transmission-trashing 900lb ft plus) plus a completely re-worked chassis – would be hard to overestimate.

But despite its visual potency and turbo-massaged firepower, the SL65 Black lacks the true drama of a full-on mid-engined supercar. It has a curiously calm aura, an implied ‘don’t make me angry, you wouldn’t like me when I’m angry’ threat, but securely locked away until needed. The cabin is much like any other SL’s. The aluminium paddles provoke a twinge of extra excitement, but then you remember they’re hooked up to Merc’s old five-speed auto – albeit with uprated hydraulics for faster shift speeds – rather than the properly sophisticated seven-speed semi-auto from the much cheaper SL63 AMG.

Then there’s the sonic contribution of the engine, which seems to have no mechanical ‘edge’ at all, merely numerous, minutely varied layers of ‘whoomph’. It’s subdued from the inside, too, and fails to make the electrical connection with the small hairs on the back of your neck. For all its jaw-dropping pace and sensational on-road presence, the SL65 Black is neither a hardcore track tool nor a truly inspiring supercar.