Evo has got prices, spec and official images of the forthcoming two-seat Mini Coupe, on sale later this year 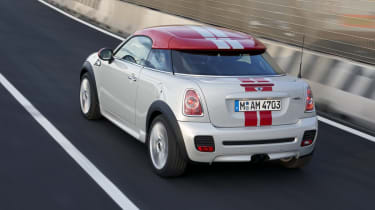 Mini has released prices and official pictures of the forthcoming Mini Coupe ahead of it going on sale in October. Prices for the two-seater will range from £16,640 for the entry-level version all the way to £23,795 for the full-on John Cooper Works version.

We've already driven a prototype version of the Coupe, but now we can also tell you where it will fit into the market, with pricing that sees it undercut cars like the Audi TT and Peugeot RCZ by a considerable margin.

And for determined fuel misers there's also a diesel version, the SD Coupe, which features the more powerful 143bhp version of Mini's existing oil-burner. That translates, officially, into a 7.9 second 0-62mph time, 65.7 mpg and CO2 emissions of 114g/km - enough to earn it free road tax. It will cost £20,510. Six-speed manual transmission comes as standard, with the option of an autobox on the standard car, the S and the SD.