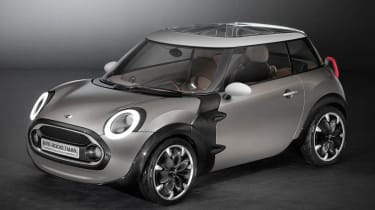 The new Mini Rocketman concept will be on show at the 2011 Geneva motor show. At the opposite end of the scale to the Countryman, this new concept could point towards a return to a properly miniature Mini. At just over three metres in length, the Rocketman adds just a few centimetres in length to Issigonis’s 1959 original. Although the new Rocketman study is not a pre-production concept as the Countryman and Paceman have been, it could provide some clues as to the future direction of Mini. Rumours persist that a small-scale Mini is likely to be part of the Mini family in 2013 based on BMW’s new front-wheel-drive architecture. The Rocketman is constructed around a carbonfibre space-frame chassis partially visible on the car’s exterior, particularly around the doors and A-pillars. The usual New Mini design hallmarks are present and correct, including wraparound screen profile, ‘floating’ roof and large diameter 18in wheels. The roof itself is a full surface glass unit, featuring illuminated strips arranged in the shape of a union flag. Unusual stirrup-shaped projector light units lend the concept a distinctive rear graphic. The Rocketman’s interior packaging is based around a 3+1 seating layout along the lines of the Toyota iQ. Three sliding seats enable three adults to be accommodated whilst a simple seat moulding behind the driver makes it possible for a fourth occupant to fit in as well provided they’re flexible enough. Alternatively the backrest to the fourth seat can be folded out of the way to provide a stowage surface. Access is aided by double-hinged doors which enable a wider opening aperture in confined spaces. The carbon construction means the doors can also take part of the sill with them when they open, further aiding access.

The Rocketman also features a two-part tailgate, one part attached to the roof whilst the lower section extends outwards in the fashion of a drawer, something of a nod to the original Mini’s bottom-hinged boot lid. The extra exterior hinges also provide a stylistic throwback to the original Mini. The exposed carbon theme continues inside the Rocketman, combined with leather covers, high gloss surfaces and a few unusual touches such as the use of recycled paper on the LED-backlit door trims. The centre speedo now features a central control unit which can be configured on a computer before a journey to update the navigation directions, music playlist or contact details for mobile devices. A look at the Rocketman from the front or rear reveals its narrow, lightweight wheels enclosed in carbon fibre in the interest of aerodynamics.  BMW suggest the lighweight concept would be capable of 94 mpg.  Whilst a production variant would likely lose the weight-saving carbon fibre chassis, it would still be fairly frugal with BMW’s forthcoming 3-cylinder petrol and diesel engines the most likely power source. See the rest of evo’s 2011 Geneva motor show coverage