Can you believe it is more than 50 years since the Mini Cooper won the Monte Carlo Rally? Here's a gallery for your enjoyment 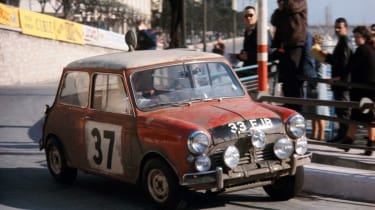 Almost 50 years ago to the day, the classic Mini won the Monte Carlo Rally for the first time. Driven by Northern Ireland’s Patrick ‘Paddy’ Hopkirk and co-driven by Henry Liddon, the little British city car astounded onlookers as it defeated the odds and darted through the mountain passes and winding country roads, covering ground over ice and snow to defeat cars with significantly more power. Winning the rally on 21 January 1964, the number 37  Mini became the founding father for over a decade’s worth of David and Goliath style motoring battles against far more powerful rivals, with Hopkirk’s teammates, Finland’s Timo Mäkinen and Rauno Aaltonen bringing two more wins to the stable in 1965 and 1967.

Half a century on, an 80 year old Paddy Hopkirk is just as proud of his winning Mini as he was in 1964. ‘Although the Mini was only a little family saloon, technically it had a lot of advantages. Its front-wheel drive and front-mounted transverse engine were a great advantage, and the fact the car was smaller and the roads were ploughed, they were quite narrow, so I suppose that was an advantage. We were very lucky – the car was right, everything happened at the right time and came together at the right moment.’

The Mini’s advantages weren’t developed for the rally stage however. Its clever packaging and compact shape were developed to provide a practical, affordable solution to urban transportation. It just so happened that this design meant that a car based on a 34hp engine was all that was needed to fight off bigger rivals. The car to contest in the rally was unsurprisingly a Cooper S version, prepared by the BMC works team and featuring a tuned 90hp engine, but it still possessed the same basic structure and attributes found on the road-going city car.

It’s true the motoring world has moved on drastically, so cars producing less than 100bhp and featuring two-wheel drive would find it near impossible to compete in the premier class of Monte Carlo’s rally, but in that classic era of the swinging 60s, the original car became one of the most memorable icons. An icon for a decade, and of course, an icon for Britain.