Mini has launched the new 167bhp diesel Mini Cooper SD, as well as the basic 1.2-litre petrol-engined One. Details here 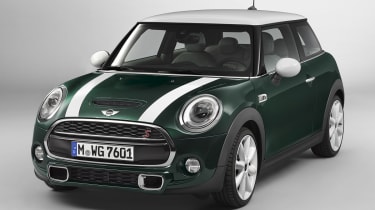 BMW has released details of the most powerful diesel variant of its new Mini to go on sale in July this year. The turbocharged 2-litre four-cylinder Mini Cooper SD is set to be a popular choice for buyers of the classic hatch looking for a mix of performance and economic motoring.

Producing 167bhp and 265lb ft of torque, the hottest ever diesel Mini can accelerate from 0-60 in 7.3secs when fitted with a manual ‘box, with that time being shortened by a tenth when the six-speed Steptronic ‘box is selected. This is combined with fuel consumption as low as 70mpg and CO2 emissions as low as 106 g/km.

After driving the 2014 Cooper, we liked the improvements to the latest Cooper’s interior and its well-balanced chassis. Part of the new line up is the entry level Mini One, which utilises a 1.2-litre three-cylinder petrol engine producing 74bhp and 111lb ft. This provides a 0-62mph time of 12.8secs, but does at least bring with it fuel consumption of about 56mpg. CO2 emissions are between 117 and 122 g/km.

Both of these new engines will be available from July, joining three other petrol power plants and two other diesels, all of which are available in three- or five-door cars, a first for the Mini.