The Morgan Aero 8 has classic looks and up to 362bhp from just £35K. It’s got an aluminium chassis, BMW V8 power and an exhaust note to die for. Tempted? We tell you what to look out for 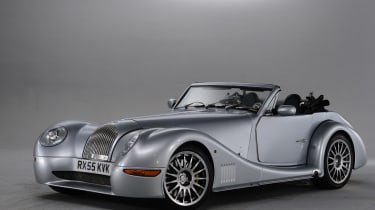 We spoke to Phil Benfield at Allon White Sports Cars in Cranfield, a Morgan dealer and specialist. He told us what to look out for when buying a used Aero 8.

EngineCheck for traces of oil leaks on the nearside of the engine. ‘The O rings between the filter and the housing tend to go hard and spring a leak,’ says Phil. ‘It’s a fairly straightforward job to replace the seal, albeit a little fiddly.’

A full service history is crucial, particularly early on. ‘All Aero 8s were specified with a 1000-mile service – basically oil, filter and inspection – so buyers should check that this has been carried out as part of a complete history.’

Thereafter, Aero 8s should be serviced annually or at 10,000-mile intervals, and earlier examples – prior to 2007 – also require a visual inspection every six months.

According to Phil, pretty much every Aero 8 suffers from driveline shunt, mainly due to the nature of the clutch. ‘It’s very sharp,’ says Phil. ‘It tends to be in or out, and it can take a while to get the hang of smooth gearchanges.’

Be sure to check the rear axle. ‘The rear pinion seals can weep oil,’ says Phil. ‘However, this isn’t a particularly involved repair – a few hours of labour and relatively cheap parts.’Chassis, wheelsThe strength of the car’s aluminium chassis is incredible, so there are no issues with integrity. However, Phil does point out that as all Aero 8s were handmade, no two will be completely identical.

Wheel bearings are a weak spot on this car. ‘Aero 8s can wear out wheel bearings in 20,000 miles or so,’ says Phil. ‘This is because they have large wheels and tyres and can generate high cornering forces. Wear in the lower ball-joints is also quite common.’

The OZ magnesium alloy wheels on Series 1 models should also be checked carefully. ‘Buyers should inspect the inside of the wheel rim, as they can become cracked after running over potholes, for example, and it’s a very expensive repair or replacement. Later wheels are much less prone to this.’

With that swooping front end so close to the road, stone chips are always a problem. In fact, nearly every Series 1 Aero 8 will have had some paintwork to sort this.

The bottom of the front and rear wings suffer too. ‘Stones get kicked up and chip the paint off here,‘ says Phil. ‘The front splitter can also bubble around the edge, where the indicator sits. Early cars had two-piece front wings, so paint repairs are easier to carry out. Check along the bottom of the wings, as they can bubble in time.’Interior

It’s possible for water to get in past the hood. ‘They tend to leak around the windows,’ says Phil, ‘so check for evidence of this. Be suspicious of anyone selling an Aero 8 who says it’s completely watertight.’

The window mechanisms in early cars can fail, meaning a new motor and winder assembly, so it’s worth checking both work without noise.

Interiors can also wear quite quickly. ‘This is because of the way you have to get in and out of the car,’ says Phil. ‘You can have a low-mileage car with a high-mileage interior.’

Series 1 cars can now be had from around £35,000, which, when you consider they will have done a relatively low mileage in most cases, is pretty good value. A Series 2 will be around the £50,000 mark, give or take depending on mileage. A late Series 3 or a Series 4 car will be closer to the £68-70K end of the scale – that’s almost what they cost new, but you will be looking at a car that’s only a few months old and has just a handful of miles on the clock.

*All prices correct as of October 2010