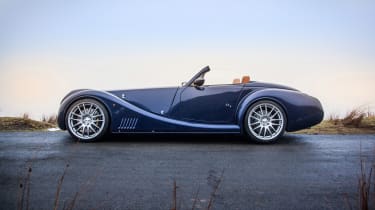 Morgan has resurrected the Aero 8 nameplate at the Geneva motor show, with a fifth-generation car boasting discreet but numerous changes over the previous model.

A tonic to progressive cars such as Koenigsegg’s hybrid Regera and the carbonfibre-aluminium-monocoque-based Lamborghini Aventador SuperVeloce just a short stroll away from the British marque's stand, Morgan’s new flagship majors on more traditional thrills.

The original Aero 8, which debuted at Geneva a decade-and-a-half ago, was arguably the most innovative car ever to leave Morgan’s 1937-spec Malvern factory and the latest iteration continues that legacy.

Charged with transmitting power from a 362bhp BMW-sourced 4.8-litre V8, the two-seater Aero 8’s aluminium chassis has been stiffened and is aided by all-new suspension, anti-roll bars and a new limited-slip differential (also from Munich). Morgan claims the car’s front axle has been entirely re-engineered, and power is sent to the rear wheels through either a six-speed manual or a paddleshift-operated ZF automatic transmission.

While much of the design is new, the most noticeable of chief designer Jonathan Wells’s changes is the smoothing of the rear deck – bodywork that previously featured a charismatic ducktail spoiler. In its place is an elegant clamshell boot that either stores or tensions a mohair hood, or owners can option a hardtop, which transforms the Aero 8 into a debonair coupe and something Jules Verne might approve of. 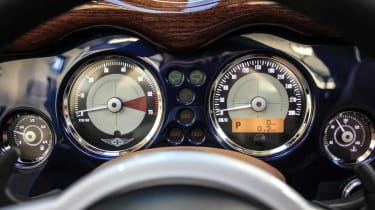 As in the past, a side-exit exhaust is optional, which along with the Aero 8’s cross-eyed gaze and Bugatti Atlantic-inspired front wings forms an integral part of the car’s idiosyncratic appeal. The exhaust is undoubtedly a must-have, and augments the impression of a machine from a bygone age.

Morgan is yet to release a kerb weight for the Aero 8, but the car is expected to gently tip the scales at roughly 1050kg. That would give it a power-to-weight ratio of 350bhp – equal to that of a Ferrari Scuderia Spider 16M, one of Maranello’s lightweight specials.

It’s the power from that howling V8 in light of relatively little mass that will ensure that the latest Morgan Aero 8 is as lively as its forebears – lively and ferociously fast. The front-end of the Series 4 was always planted and the revisions made to this one will only enhance that attribute. Like all powerful Morgans, however, it’s the swinging rear axle that drivers will have to be alert to.

Anti-lock braking and electronic brake distribution should help drivers shed speed with panache, but there is still a conspicuous lack of traction or stability control electronics. This may be the most refined car ever to wear the winged insignia, but it is still not a machine for the faint-heated.

Interior quality appears to be a notch above that of previous range-topping Morgans, but buyers will still have a choice of wood, leather and box-woven carpets. Carbonfibre-shelled seats are now an option, though, and there’s also an uprated air-conditioning system for added appeal in warmer markets.

Morgan’s new Aero 8 will enter production this winter with ‘infinite’ combinations of paint, leather and detailing. Prices are expected to start at £80,000, although substantially more expensive Aeromax and SuperSports models may well follow. If that’s too much of a stretch, prices for previous versions start at around £32,000.