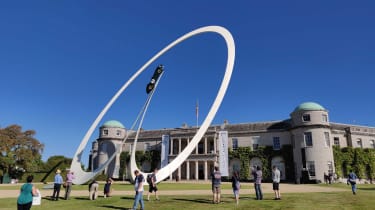 Following the postponement of the 78th Members’ Meeting, Goodwood has announced that Festival of Speed will also be shifted to a later date in 2020 amid the COVID-19 outbreak.

First held in 1993, the Goodwood Festival of Speed has become one of the UK’s largest automotive events, showcasing the very latest machines from around the globe. Previously scheduled for 9-12 July this year, organisers are now hoping to hold the event in late summer or early autumn due to recent advice from the UK Government and Public Health England.

New dates are still under consideration, but will be announced in ‘the coming weeks’. Should you have already purchased tickets, they will still be valid for the new dates.

Owner of the Goodwood Estate the Duke of Richmond said: ‘Over the last few weeks, we have been working together with everyone involved to understand the viability of the Festival of Speed going ahead in July. Due to the uncertainty of the coronavirus threat and not knowing whether the situation will have significantly improved by then, we sadly need to postpone the Festival of Speed in July.’

He went on to say: ‘These are dramatic and unbelievable times but they will pass and we are already trying to think about just how exciting it’s going to be to welcome you all back to Goodwood for what perhaps might be the “Greatest Event Ever”.’

In excess of 600 vehicles are set to be on display, as always, including fresh metal from various car makers around the globe, some likely to make dynamic debuts on the famous 1.16-mile hill climb. As we’ve seen in previous years, cars adorned in camouflage may also be on display, allowing attendees to get up close and personal with some of the industry’s unreleased machines. 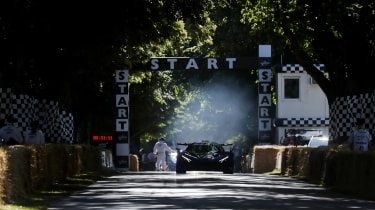 The likes of Mercedes-Benz, Alfa Romeo, Ferrari, Porsche, Lotus, McLaren and Williams are set to attend the 2020 show, bringing some of the greatest competition cars and motorcycles ever built, alongside some of the latest to grace our tarmac.

Not only will the show feature a display of the world’s latest and greatest vehicles, it will also celebrate maestros such as eight-time Grand Prix winner Jacky Ickx, John Surtees, and the legendary Jim Clark.

Aside from the usual static display of metal, 2020’s Festival of Speed will also feature ‘The Arena’ amphitheatre, a section new to 2019 that featured live action from names such as Ken Block and ‘Mad Mike’ Whiddett. Pedal-powered contraptions will also be showcased in the Goodwood Action Sports arena, with live BMX, freestyle motocross and mountain biking all on display.

Festival of Speed founder The Duke of Richmond said: ‘The heyday of the Goodwood Motor Circuit coincided with a time when some astonishing talent could be seen winning in different cars from one week to the next or even during the same race meeting. It is this level of artistry which we will be paying tribute to with our 2020 theme: “The Maestros – Motorsport’s Great All-Rounders”.’

As mentioned, though dates for this year’s show are still under consideration, any tickets previously bought will be valid for the new dates.