The Lexus LF-LC concept that will be shown at next month’s Detroit motor show has broken cover early, thanks to a leak of images on the internet 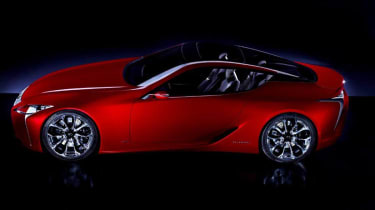 The Lexus LF-LC concept that will be shown at next month’s Detroit motor show has broken cover early, thanks to a leak of images on the internet.

Lexus has confirmed that the pictures are of the real car, and promises that the car – which is being pitched as nothing more than a styling exercise – is going to ‘explore the future of Lexus design.’ However, you’d be entirely justified in also thinking it proved that the upmarket brand is planning to introduce a smaller sportscar sister to the mighty LF-A.

The LF-LC certainly shares some of its design language with Lexus’s full-on supercar, with the design clearly indicating the combination of a front engine driving the rear wheels. A production version could also make an interesting replacement for the recently-retired SC 430.

Lexus had already released two 'teaser' images - but the leaked shot showing the front of the car has been taken from an accidentally uploaded YouTube video, so it's not the sharpest image. It's clear enough to see that the LF-LC - which is the product of Lexus's Calty design centre in California, is a striking looking thing. And, on first impressions, definitely a car that we want to see more of.

We’ll bring you more details when we get them.