1000 models to hit Japanese market, no word on rest of world 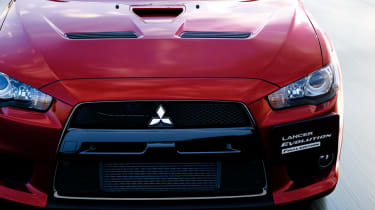 One of the motoring world’s bitterest rivalries is set to draw to a close after more than two decades with the ending of Lancer Evolution production.

Mitsubishi will put a total of 1,000 Lancer Evolution X Final Edition models into production for the Japanese market only, after first displaying the concept car in December 2014 at the Tokyo Auto Salon.

Sadly, the Tokyo Auto Salon concept’s 473bhp engine, sporting a bigger HKS turbocharger and remapped ECU, will not translate over to the production version.  Power comes from the 2.0-litre turbocharged MIVEC petrol engine seen in other variants of the Evo X. 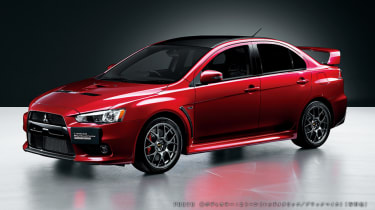 While a headline power figure has not been announced by the manufacturer, it is expected to produce approximately 300bhp. The Final Edition will, however, be available with a five-speed manual 'box and will be based on the GSR bodyshell.

The interior will feature black leather Recaro seats with red accident stitching. A plaque bearing the build number of the car will also be included.

The swansong Evo’s external revisions are provided by some of the biggest names in motorsports, including 18-inch gunmetal BBS alloys, Eibach springs, Bilstein dampers and Brembo brakes completing the chassis upgrades. ‘Final Edition’ badging will also feature on the bootlid. 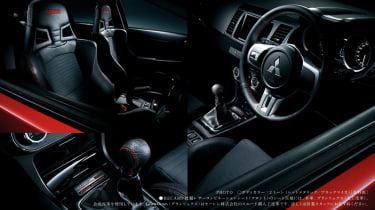 Buyers will be able to choose between five exterior colours, and specify a contrasting roof.

The tenth generation of the Lancer Evolution made its debut in 2007 and competed with Subaru’s non-Impreza-badged WRX STI. Going through several developments during its eight-year production run, the fastest version of the Evolution X was the FQ-400. evo loved its point-to-point ability, but felt that some of the fun of the Evolution IX had been lost in the pursuit of better day-to-day usability.