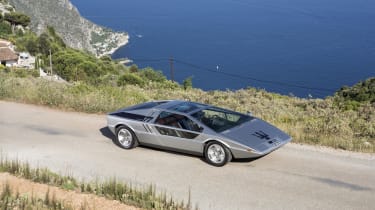 A one of a kind Maserati is expected to sell for £2.9million when it goes under the hammer at Bonhams’ September Chantilly Sale. Called the Boomerang, the 1971 prototype supercar was created by renowned Italian designer, Giorgetto Giugiaro, and is said to be a key inspiration for his design of the Mk1 VW Golf.

Underneath its wedge shaped body sits the chassis and engine of the Maserati Bora. The mid-mounted 4.7-litre V8 produces 300bhp at 6000rpm and sends drive to the rear wheels, enabling a claimed top speed of 186mph. This was especially fast for the time – the Lamborghini Miura, for example, could only manage 171mph.

The means the Boomerang is a fully functioning high-performance supercar, but unsurprisingly, it’s best remembered for that striking body design. First exhibited at the 1971 Turin Motor Show, the car’s low-slung shape, elongated glasshouse and futuristic interior pushed the boundaries of design. 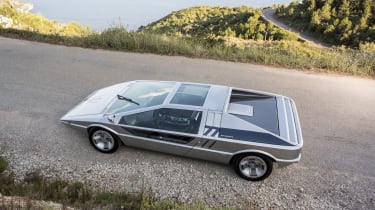 The steering wheel is perhaps one of the car’s most distinctive features, housing gauges and switches within its circumference. Passengers sit far back, DTM-style, with a long sweeping transmission tunnel seperating the two low-slung seats.

Giugiaro, the man behind the Boomerang, initially worked in Fiat's styling office but moved to the Bertone Design Centre as a manager aged just 21. He was responsible for designs for the likes of Aston Martin, Jaguar, Ferrari and Maserati. 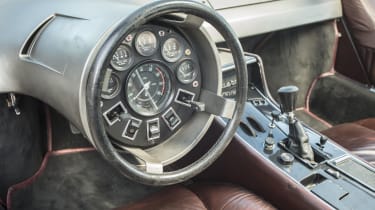 After the Boomerang was initially unveiled in concept form in 1971 at the Turin Auto Show, it re-appeared at the Geneva Motor Show in 1972 as a fully functioning car.

Philip Kantor, Bonhams European Head of Motoring, said: 'The Boomerang was the first car of its time to create such a strong, angular style statement. It's considered by many to be one of the most remarkable designs of the 20th century and the "grandfather" to the Volkswagen Golf Mk 1.'