British racer will demonstrate new track-only hypercar ahead of race

Aston Martin Racing works driver Darren Turner will demonstrate the 800bhp Vulcan to the public when he drives it around the Circuit de Spa Francorchamps ahead of this weekend's Spa 24 Hours. The British racing driver has played a pivotal role in the development of the track-only Vulcan, and will complete two flying laps of the 7km circuit on Saturday.

Like Turner’s Vantage GTE race car, the Vulcan utilises power from an atmospheric V12 engine. But without racing regulations and restrictors to contend with, the Vulcan’s 7-litre unit is 1000cc bigger and produces a substantial 200bhp more. Add slick tyres and claims of 1300kg of downforce at 200mph, and the Vulcan’s pace should threaten the lap times of the fastest Spa 24 Hours GT3 cars. 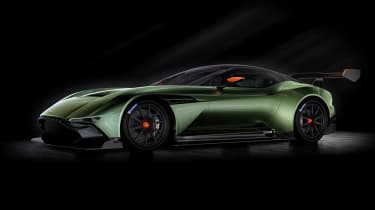 Though he won’t be racing in this weekend’s event, Turner is excited to drive the Vulcan in Belgium. ‘It’s been amazing to have been involved in this project from the very beginning,’ he says. ‘From the conceptual sketches through to working the with designers on driver ergonomics, it is a fascinating process to be a part of.’

The Vulcan made its dynamic debut at the Goodwood Festival of Speed back in June, but this will be the first time the public has seen it driven flat out on a proper track. ‘It was very early days for the car when we ran first ran it at Goodwood,’ adds Turner. ‘But we certainly made a good impression and now we get to show the car in its most natural environment.’

The Vulcan’s front mid-mounted V12 was developed in conjunction with Aston Martin Racing. It sends drive to the rear wheels through an Xtrac six-speed sequential gearbox mounted at the rear. Aston Martin claims that the Vulcan’s power-to-weight ratio is better than that of its GT3 and GTE racers – impressive considering the latter produces in excess of 510bhp/ton. 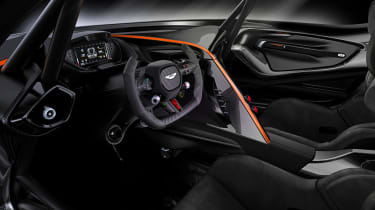 The use of carbonfibre for the monocoque, body and prop shaft has helped to keep weight down on the Vulcan, while the fitment of an integral limited-slip diff, carbon ceramic brake discs (of 380mm and 360mm diameter), pushrod suspension with anti-dive geometry and adjustable dampers and anti-roll bars should ensure its pace is suitably rapid. Just 24 Vulcans are being built, each selling for an eye-watering £1.5million.

Though its racing arm isn’t fielding any factory cars in the Spa 24 Hours, Aston Martin will be supporting two customer teams who are running Vantage GT3s in the endurance race. ‘Both Leonard Motorsport and Oman Racing by Motorbase are capable of getting a class podium finish and we are looking forward to supporting them,’ comments Aston Martin Racing Team Principle John Gaw.