McLaren's MP4-X is the F1 car of the future 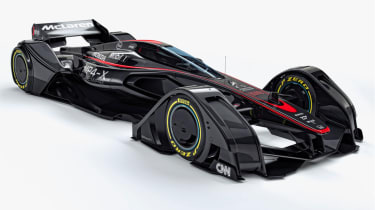 'With the futuristic McLaren MP4-X concept racecar, we wanted to peer into the future and imagine the art of the possible,' said John Allert, Group Brand Director, McLaren Technology Group.

'We have combined a number of F1’s key ingredients – speed, excitement and performance, with the sport’s emerging narratives - such as enclosed cockpits to enhance driver safety, and hybrid power technologies.'

Race technology plays an important role in the development of road cars. The MPX-4 will use a powertrain that builds on the existing hybrid motors and energy recovery systems already used in the McLaren P1 hypercar and Formula E. Further enhancements will employ solar cells for recharging and exploit aerodynamics with ultra-thin batteries which can be placed within the chassis and body structure. 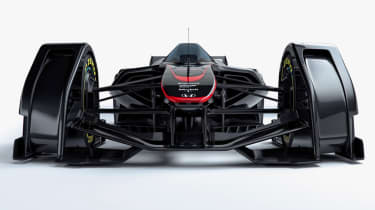 Using a structurally-mounted glass canopy the enclosed cockpit increases driver safety and allows for new systems, such as a 360-degree augmented vision display offering an unrestricted view of surroundings. A heads-up display will replace traditional instruments and could even include a fighter-pilot style display system to highlight the position of rivals.

Additionally, self-powered tyre sensors could monitor pressures during races, and paired with an on-board pressure regulator unit, adjustments could me made to achieve the optimum traction performance.

'MP4-X’s wheel covers have an aero benefit, but, because the wheel is now fully encased, they also offer far greater visualisation of what the tyre is doing and how it is behaving,' said Tim Stafford, head of business development at McLaren Applied Technologies.

'It provides the perfect opportunity to map the entire surface of the tyre with wear and temperature sensors.'

McLaren says that a vehicle with no physical controls in 'entirely possible' – as such, the MP4-X is designed to use technology developed in partnership with GSK to help patients with neurological diseases. Electrical signals within the driver’s brain can be monitored and combined with gesture detectors to control the vehicle.

The MP4-X is a long way from being seen on the track but, regulatory issues aside, its sci-fi tech indicates the direction that McLaren technology can take racing and perhaps even road cars.