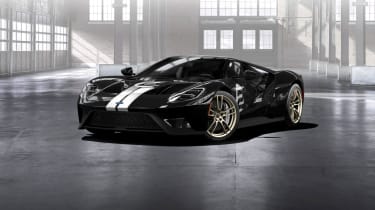 The Ford GT '66 Heritage Edition is a limited run special of Ford's new GT supercar designed to celebrate its Le Mans win back in 1966.

It features special Shadow Black exterior paint in either a matte or gloss finish, as well as silver stripes and No.2 decals. The No.2 stickers reference the 1966 race winning car driven by Bruce McLaren and Chris Amon.

Inside the car's carbon fibre seats are covered in ebony leather, while gold accents adorn various parts of the interior switchgear. The blue seatbelts are also a nod to the Le Mans winning 1966 GT race car. 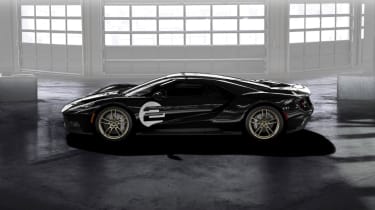 The car is only to be sold in 2017, making it a limited run version of an already extremely rare supercar.

Ford will produce just 250 GTs every year, while applications to buy the car number 6500. Over 200,000 people have configured the car on the Ford GT website. The order books are now closed, with Ford priotising people who will keep, drive and care about the car.

Expect a number of the 250 built to be the '66 Heritage Edition, but specifics are not known.