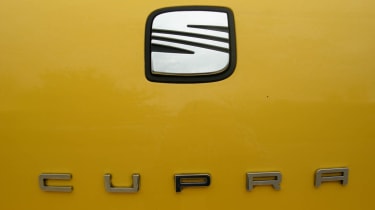 SEAT’s Cupra line of high-performance cars is set to be bolstered in coming years, with the introduction of electric models, says SEAT R&D Boss Matthias Rabe.

Speaking to Auto Express at the reveal of the new Arona, Rabe said: 'Cupra is extremely important to us. And I am totally sure we will see Cupra versions of [our] electric cars.'

'Electric cars have fantastic performance and acceleration – Cupra and electrification is not a contradiction.'

Currently, the only model in SEAT’s Cupra range is the Leon Cupra – the Ibiza Cupra has been discontinued to make way for a new Ibiza. A hot Ateca Cupra is set to join the ranks next year, though, with a 2.0-litre turbocharged petrol engine tuned to 300+bhp and four-wheel drive.

But it’s not just pure electric cars SEAT is chasing. Rabe admitted the brand is planning hybrid and plug-in hybrid versions of future models. 'We see more potential for 100% fully electric vehicle, but for also we see improvements for combustion engine vehicles and potential for hybridisation and plugin hybrid on existing vehicles,' he said.